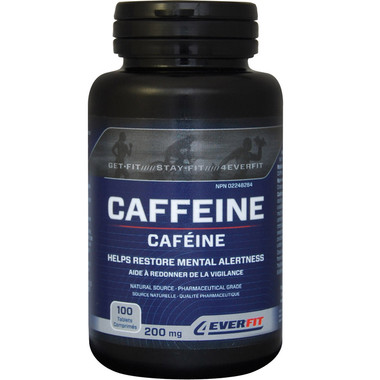 Caffeine
Caffeine is a naturally occuring stimulant with the chemical name trimethylxanthine, it is one of the most commonly used drugs in the world.

Caffeine has many effects on the body, from increased metabolism to stimulating the body’s central nervous system. Many people use caffeine for a boost of energy and increased alertness, caffeine also a mild diuretic. Not all people feel the same effects from caffeine as some people are more sensitive to caffeine than others and a tolerance can be built up to caffeine.

Suggested Use
For adults and children 12 years and over, take half to one tablet not more often than every 3 to 4 hours, up to a maximum of 1,000 mg in 24 hours.

Warnings
For occasional use only. Caffeine intake is not advisable in cases of high blood pressure or pregnancy. It is not intended as a substitute for sleep. The recommended dose of this product contains about as much caffeine as a cup of coffee. Limit the amount of caffeine containing medications, beverages, and foods. Too much caffeine may cause nervousness, irritability, sleeplessness and occasionally rapid heart rate. Consult a physician before using this product if you are taking any medication or are under a doctor’s care. Do not use if the seal is broken or missing. Keep out of reach of children.