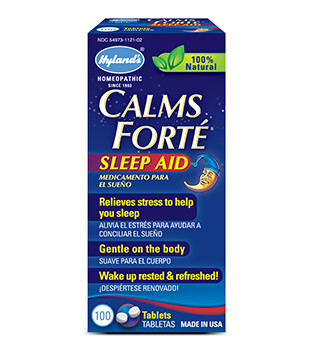 Don’t even think about another bad night’s sleep. Your body is built to rest. Calms Forté® uses four homeopathically-prepared botanicals to ease your body and your mind, plus six minerals to soothe nerves and edginess. There are no sedatives, so no next-morning drug hangovers. This natural and safe sleeping aid has helped people get their much needed ‘zees’ for over 50 years.

As with any drug, ask a doctor before use if pregnant or nursing.

Consult a physician if: ▪ Symptoms persist for more than 7 days or worsen

Keep this and all medications out of the reach of children.

In case of accidental overdose, contact a medical professional or a poison control center immediately.

Do not use if imprinted tamper band is broken or missing.

Adults & children 12 years and over: As a relaxant: Swallow 1-2 caplets with water as needed three times daily. For occasional sleeplessness: 1-3 caplets ½ to 1 hour before retiring.

Children 6 to under 12 years: As a relaxant: Swallow 1 caplet with water as needed three times daily.For occasional sleeplessness: 1-2 caplets ½ to 1 hour before retiring.