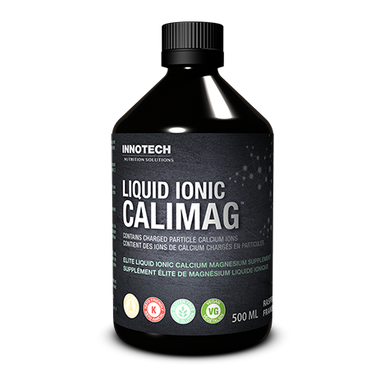 Medicinal Ingredients (per 30 Ml Or 1 Oz)

A Surprising Fact: Very Little of Your Total Calcium Intake Gets Absorbed

Adult women seem to be the ones most interested in getting enough calcium as they strive to prevent osteoporosis (loss in bone mass). It may surprise you though, that the amount of calcium that your body absorbs and utilizes is very small relative to the amount of calcium you consume. Net calcium absorption can be as high as 60% in infants and young children, when the body needs calcium to build strong bones. Absorption, however, slowly decreases to 15-20% in adulthood and even less as one ages. So if you consumed about a 1000mg of calcium today, you absorbed, at most 200mg.

Why is absorption limited?

First, without getting into complicated chemistry, you need to know that calcium is an atom which carries a charge (it is positively charged, just like the positive side of a magnet). As such, it has a strong tendency to attach itself to other substances that carry an opposite negative charge. Therefore, in nature, calcium is generally attached to other substances, such as amino acids, or it could appear as a salt, such as calcium chloride, calcium citrate, calcium carbonate, etc.

However, calcium is absorbed in the intestines in its ionized (detached, charged) form. Calcium becomes ionized through the digestion process in the stomach, as enzymes assist in cleaving the bond between the calcium and the compound it is attached to (again, this could be an amino acid, citrate, carbonate, etc.). The efficacy of this process varies and depends on factors such as age, digestive capacity, etc. At the end, less than 20% of all the original calcium is freed up and ionized and available for absorption. Generally, the less calcium you ingest at any given time, the more of it you will absorb.

The vast majority of the calcium gets absorbed throughout the small intestines (which are longer than the large intestines) in two different ways.

Higher up in the small intestines calcium is absorbed in a process called “active transport”. This process requires energy and is fuelled by a substance called ATP and by vitamin D. It is somewhat like a rotating door that allows the calcium to get in. ATP and vitamin D provide the “door” with the energy (or the “electricity”) to rotate. When the amount of ionized or free calcium is relatively low, most calcium will get absorbed by the intestines in this fashion. This is why you hear that calcium needs to be taken with vitamin D. Vitamin D facilitates or fuels this absorption process.

Because most calcium supplements are absorbed at less than 20% most of such calcium is absorbed through the less efficient active transport process.

How much calcium are you getting from supplements?

Here is a little lesson in “calcium mathematics”. Say you consume 500 mg daily of calcium in the form of calcium citrate or calcium carbonate. This does not mean that you have 500 mg of calcium available. 500 mg corresponds to the calcium and the citrate together. So in calcium citrate, calcium accounts for 21% of the molecule. This means that out 500mg calcium citrate you get 105 mg of net (elemental) calcium. Once you ingest it, you absorb at most 20 of the 105 mg, which is equal to 21 mg or less.

So many people who think that they are getting 500 mg calcium from such a supplement are actually getting only small fraction.

How to maximize the amount of calcium absorbed from a supplement?

Enter CaliMag from Innotech Nutrition. CaliMag is a unique calcium/ magnesium liquid supplement as it offers pre-ionized calcium atoms. The calcium in CaliMag is attached to a molecule called gluconate. However in lab, it undergoes a unique proprietary process to weaken and destabilize the bond between the gluconate and the calcium to such an extent that as soon as you ingest CaliMag the calcium easily dissociates it self from the gluconate without needing to go through the digestion process.

What you end up with is a large pool of ionized calcium, most of which bypasses the active transport process, which requires vitamin D and it gets absorbed through the ion channels in the lower parts of the small intestines. This results in close to a 100% absorption.