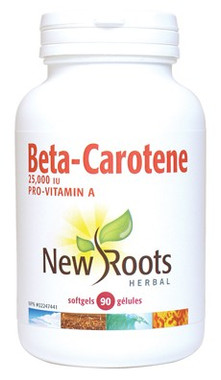 Take 1 softgel daily as directed by your health-care practitioner.

beta-Carotene is a precursor to vitamin A as well as a potent antioxidant providing other protective functions in the body. Vitamin A is essential for many functions in the human body including vision, growth, bone development, tooth development, maintenance of healthy epithelial tissues, protection against cancer, and reproduction, as well as coenzyme and hormone roles. Although vitamin A has toxic effects at high doses, beta-carotene (and other carotenoids) have no known toxicity. Though beta-carotene may be the best known of the carotenes, approximately 500 of them have been identified, and their health benefits are just beginning to be recognized. beta-Carotene and other carotenoids act as antioxidants in the body, protecting the body from the harmful effects of free radicals.

New Roots Herbal uses a natural algae form of beta-carotene. Dunaliella salina is salt-water microalgae that accumulates massive amounts of carotenoids under appropriate growth conditions. beta-Carotene, a vital antioxidant, constitutes about 90% of these; the other 10% are made up of alpha-carotene and xanthophylls like lutein, zeaxanthin, and cryptoxanthin—the same carotenoids found in fruits and vegetables. However, the amount of beta-carotene found in D. salina is many times more than in fruits and vegetables.

The US National Cancer Institute (NCI) recommends the consumption of 5–6 servings of fruits and vegetables in a day to get the required daily 4–5 mg of beta-carotene. However, with our current lifestyle, it may not be possible to eat right every day and most do not get this amount. The answer is natural carotenoids from D. salina.

New Roots Herbal’s natural beta-carotene contains only the highest quality blend of carotenoids derived from the sea algae D. salina. The carotenoid content of this source is a blend of the six naturally occurring carotenoids that are commonly found in various fruits and vegetables. The ingredients are suspended in soybean oil and contained within a soft gelatin- and glycerin-based capsule.