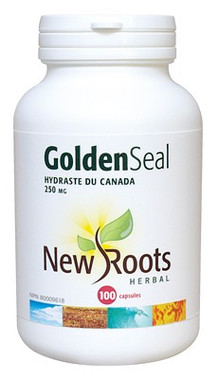 Traditionally used in herbal medicine to help alleviate infectious and inflammatory conditions of the digestive tract such as gastritis, as a bitter to aid digestion and to increase appetite, to help relieve digestive disturbances such as dyspepsia, and as a mild laxative.

Adults: Take 1 or 2 capsules three times daily or as directed by your health-care practitioner. May take up to one week to produce beneficial effects.

Goldenseal root has been used by Native American healers for a wide range of ailments. The Indians used goldenseal for local inflammations and infections. The plant was also utilized to improve digestion as a bitter tonic and to treat ulcers. An infusion of the root was used as a soothing rinse for eye and skin infections.

The active ingredients of goldenseal include a group of alkaloids, hydrastine and berberine; these alkaloids are strongly astringent and help reduce inflammation of mucous membranes. They alkaloids also have antiseptic properties. Hydrastine has been reported to lower blood pressure and stimulate peristalsis, and is also antitussive. Berberine induces the secretion of bile and helps stop bleeding. A great deal of research has shown that berberine has antibacterial, antifungal, and antiparasitic activity. Goldenseal stimulates involuntary muscles through an oxytocic effect in the intestinal tract and uterus. The plant has been used during childbirth when the labour is protracted.

Goldenseal root has been recommended for a variety of inflamed mucous membranes, including stomach, intestinal, vaginal, and rectal. It has been reported that the plant relieves pains, helps heal wounds, and stops bleeding. In addition, its antibacterial action helps reduce or prevent infection of open sores. The Indians used the plant for diarrhea, dyspepsia, liver problems, flatulence, pneumonia, cancer, and rattlesnake bites. This plant nowadays is used as a laxative and is also considered beneficial for hemorrhoids and mouth sores; as a diuretic; for eye infections, acne, and sore throats; to ward off infections; and as an antiseptic.