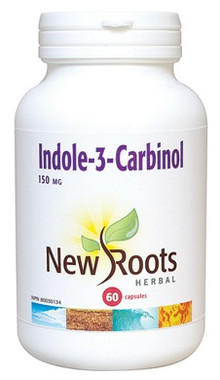 Indole-3-carbinol is the phytochemical responsible for the antioxidant properties of the family of vegetables known as Brassicaceae (formerly Cruciferae), which includes broccoli, cabbage, Brussels sprouts, and cauliflower.

Adults: Take 2 capsules once daily or as directed by your health-care practitioner.

New Roots Herbal’s Indole-3-Carbinol (I3C) is an isolate derived from the family of vegetable which includes broccoli, Brussels sprouts, and cauliflower. This organic compound is formed as a result of the action of the enzyme myrosinase with the precursor compound indole-3-glucosinolate within these vegetables upon maceration (crushing). The antioxidant activity of indole-3-carbinol protects cells, including their DNA, from the carcinogenic effects of environmental toxins we are exposed to on a daily basis.

Initial research with I3C was conducted to determine its potential use in breast-cancer prevention. Further research conducted with I3C has revealed potential benefits for its use in cases of prostate and colon cancer.

An article published in the Journal of Nutrition in December, 2004 reported a study conducted at Wayne State University in Michigan to have shown I3C to inhibit the growth of prostate cancer cells, along with inducing apoptosis (programmed cell death). I3C triggers a reaction that compromises mitochondrial potential and subsequently contributes to the eradication of cancer cells. Mitochondria are the power plants that provide the energy for every living cell.