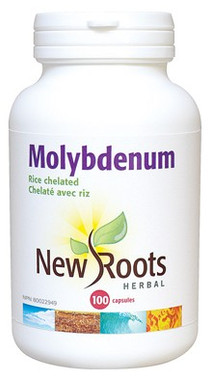 Molybdenum is a component of three different enzymes which are involved in the metabolism of nucleic acids and several important interactions that lead to detoxification of the liver.

Adults: Take 1–4 capsules daily or as directed by your health-care practitioner.

Molybdenum is a component of three different enzymes which are involved in the metabolism of nucleic acids (DNA and RNA) and iron, as well as of food into energy; these three enzymes are sulfite oxidase, xanthine oxidase, and aldehyde oxidase.

Molybdenum assists in the breaking down of sulfite toxin buildups in the body and may prevent cavities. With these qualities, there might be evidence of antioxidant properties in this nutrient. It assists the body by fighting the nitrosamines, which are associated with cancer, and may help to prevent anemia. It is needed for normal cell function and nitrogen metabolism. Impotence in older males has been linked to molybdenum deficiencies. Molybdenum may be of value in fighting mouth and gum disorders. As mentioned already, molybdenum is part of the enzyme sulfite oxidase, which breaks down sulfites; sulfites are found in protein food as well as in chemical preservatives in certain foods and drugs. Should your body not be able to break down these sulfites, a toxic buildup results, and your body may react with allergic reactions; these allergic reactions usually represent respiratory problems such as asthma and emphysema.

As already said, molybdenum is also a part of xanthine oxidase and aldehyde oxidase, both involved in the body’s production of genetic material and proteins. Xanthine oxidase also helps the body to oxidize purines and pyrimidines as well as to produce uric acid, an important waste product.

Deficiencies of molybdenum are identified by the absence of the three molybdenum enzymes. The deficiency of this element and the metabolic disorders that accompany it are abnormal excretion of sulphur metabolites, low uric-acid concentrations, and elevated hypoxanthine and xanthine excretion.

The absence of sulfite oxidase in metabolic disorder can lead to death at an early age. High rates of esophageal cancer has been reported in regions where the soil levels of molybdenum is low and where low intake of vitamin C prevails—although this does not clinically prove that molybdenum is involved with the prevention of certain cancers.

A dose of up to 250 mcg is considered safe, while 15 mg is at the point of toxicity. With the therapeutic use of this component, the dosage can be increased considerably, but the toxicity level must be respected. In the case of microelements, such as trace elements, the amounts needed are very small; yet they are still very important. As with all health products, this should be taken under the advice of your health-care practitioner.

Toxicity and Symptoms of High Intake

Dosages more than 15 mg may be toxic. Excess molybdenum in the body can interfere with the metabolism of copper in the body, can give symptoms of gout, and may cause diarrhea, anemia, and slow growth.