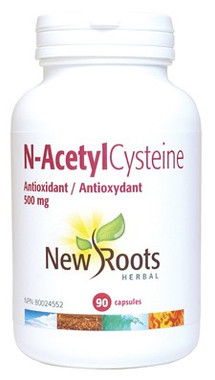 Adults: Take 1 capsule daily with a meal providing protein or as directed by your health-care practitioner.

N-Acetylcysteine (NAC) is an acetylated form of the amino acid cysteine which is more efficiently absorbed. It is also an antioxidant that is helpful at fighting viruses. It is commonly used to help break down mucus and to protect from acetaminophen toxicity. In addition, it helps the body to synthesize the antioxidant glutathione. NAC helps to reduce plasma-cell adhesion in type 2 diabetes patients. While NAC does reduce the amount of damage caused to the lungs by cigarette smoking, it does not completely protect them from damage. NAC is effective in the treatment of lung damage caused by inhalation of airborne chemicals. NAC is also used as a liver protectant and appears effective in reducing complications related to liver transplants.

NAC appears to inhibit HIV replication in a laboratory setting. Supplementation appears to slow the decline of immune functions in HIV patients. When used with glutamine, it helps in the production of glutathione, an antioxidant and peptide (short protein-like molecule) synthesized in the body from the three amino acids l-glutamicacid, l-cysteine, and glycine.

Glutathione is one of the body’s most important and powerful antioxidants. A major function of vitamin C is to keep glutathione, l-cysteine, and N-acetylcysteine in reduced form so that they can continue to have their powerful free radical–quenching effects, which appear to be helpful in preventing infection in HIV patients. The supplement N-acetylcysteine appears to minimize the severity of influenza infection. Subjects taking 500 mg twice daily experience far fewer and less severe symptoms when they become infected with the flu. N-Acetylcysteine is the more effective and used form of the amino acid l-cysteine. NAC acts as an antioxidant and is useful against viruses.