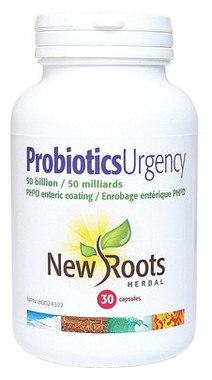 Adults, adolescents, and children ≥ 6 years old: Take 2 capsules daily with water or juice, or as directed by your health-care practitioner.

The popularity of probiotics has mushroomed over the past decade. The evidence supporting the effectiveness of large doses to deal with more acute health concerns has led New Roots Herbal to develop Probiotic Urgency.

The 50 billion live cells in each special water-based, PH5D enteric-coated capsule are formulated with prebiotics (soluble fibres) that selectively stimulate site-specific probiotic proliferation. The 10 mg each of fructooligosaccharides and arabinogalactan per capsule provide the nutrients necessary to maximize the therapeutic potential of Probiotic Urgency at the intestinal level.

Research studies conducted at University Cork College in Ireland have shown treatment with the probiotic Bifidobacterium infantis, found in Probiotic Urgency, to have normalizing effects in cases of irritable bowel syndrome. These studies reported people benefitting from relief of the symptoms of IBS including constipation, diarrhea, and bloating related to the overgrowth of Gram-negative bacteria, yeasts, and parasites.