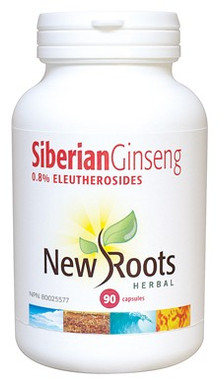 Siberian ginseng is a great immune booster and is regarded as a potent antistress nutrient.

Adults: Take 1 capsule twice daily or as directed by your health-care practitioner.

Siberian ginseng is a member of the ginseng family, though it is of a different genus than other popular ginsengs such as the Panax variety. Herbalists call it an adaptogen. Its name comes from the Cantonese jên shên, which means “man root,” so-named because some roots have limb-like branches resembling arms and legs. Because the root has a human-like shape, it is considered by Orientals to be an overall body tonic.

The root is not harvested until it is two or more years old; the older the root, the higher its value. It is held in high esteem in China, where it has been valued for thousands of years, sometimes commanding a higher price than gold. Siberian ginseng is found in the Siberian province of Russia. Many adulterated forms of ginseng exist on the market. Siberian ginseng’s main actions are adaptogen, antitoxic, antiradiation, immunoprotective, and immunoregulatory.

For patients going through chemotherapy or radiotherapy, Siberian ginseng would be very useful. In cancer therapy, the immune defenses are weakened, and Siberian ginseng offers a better tolerance to such treatments. It is also possible that it may offer prophylaxis against the development of cancer.

Siberian ginseng has immunoprotective effects against breast (mammary gland) carcinoma, stomach carcinoma, oral cavity carcinoma, skin melanoma, and ovarian carcinoma. It was found to have a pronounced effect on T lymphocytes, predominantly of the helper/inducer type, but also on cytotoxic and natural killer cells.

Siberian ginseng could be used under any circumstance where there is the need to normalize any physiological, biochemical or immunological defects.

The pharmacokinetics of eleutheroside B show that it accumulates in the pituitary, adrenal glands, pancreatic nuclei, and spleen.

Caution should be exercised when used with other medications, since Siberian ginseng inhibits the drug metabolizing enzymes and may prevent the biotransformation of other medications to less toxic compounds.