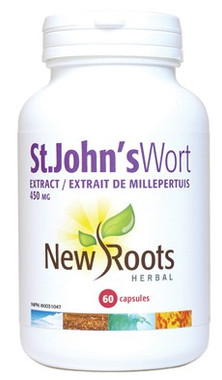 St. John’s wort is a perennial with regular flowers which bloom from June until September. The plant was believed, from the time of the ancient Greeks until the Middle Ages, to ward off witchcraft and evil spirits and to drive out devils.

Considered a noxious weed by farmers due to its photosensitizing effect on livestock, St. John’s wort has nevertheless been used by humans for centuries for a wide variety of ailments, including nervous disorders, depression, neuralgia, wounds and burns, and kidney problems, as well as for its antibacterial and anti-inflammatory actions.

Recently, a great deal of attention has been placed on the herb because of its two main active ingredients, hypericin and pseudohypericin, which have been shown to inhibit the AIDS virus.

St. John’s wort has been used for centuries to calm the nerves and treat depression. A vivid red oil made from macerating the flowers in vegetable oil has been used to dress wounds, heal deep cuts, soothe burns, and ease the pain of neuralgias.

Taken internally, the oil has been used for ulcers and gastritis. An infusion of the herb has also been used as an expectorant for bronchitis, as a diuretic for the kidneys, and as an easing agent for menstrual cramps.