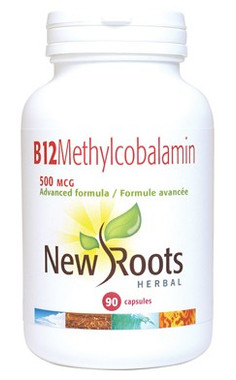 Our Vitamin B12 is the methylcobalamin form; this is a more bioavailable form of B12, with added cofactors to maximize absorption.

Vitamin B12 is a member of the vitamin B complex. It also called cobalamin and is important to good health. There are two types of commercial vitamin B12: cyanocobalamin and methylcobalamin. New Roots Herbal uses only the methyl form, as it is the coenzyme form and the only type which can directly participate in homocysteine metabolism. In addition, converting homocysteine to methionine via methylcobalamin generates an increased supply of S-adenosylmethionine (SAMe), the body’s most important methyl donor. Indeed, some of the benefits of methylcobalamin, such as protection from neurotoxicity, appear to derive from increased production of SAMe. It helps maintain healthy nerve cells and red blood cells, and is also needed to make DNA, the genetic material in all cells. Vitamin B12 is bound to protein in food; hydrochloric acid in the stomach releases vitamin B12 from protein during digestion. Once released, vitamin B12 combines with a substance called intrinsic factor (IF) before it is absorbed into the bloodstream.

Bacteria synthesize vitamin B12 exclusively, and common sources are found primarily in meat, eggs, and dairy products. Vitamin B12 is necessary for the synthesis of red blood cells and the maintenance of the nervous system, and is very important for growth and development in children. Deficiency can cause anemia and the degeneration of nerve fibres. Irreversible neurological damage can also occur.

Vitamin B12 is also necessary for the rapid synthesis of DNA during cell division. This is especially important in tissues where cells are dividing rapidly, particularly bone marrow tissues responsible for red blood-cell formation. If a deficiency occurs, DNA production is disrupted and abnormal cells, called megaloblasts, are formed; this results in anemia. Symptoms include excessive tiredness, breathlessness, listlessness, pallor, and poor resistance to infection. Other symptoms can include a smooth, sore tongue and menstrual disorders. Anemia may also be due to folic acid deficiency, folic acid also being necessary for DNA synthesis.

An insulating fatty sheath, comprised of a complex protein called myelin, surrounds our nerves. Vitamin B12 plays a vital role in the metabolism of these fatty acids essential for the maintenance of myelin. Prolonged vitamin B12 deficiency can lead to nerve degeneration and irreversible neurological damage.

When deficiency occurs, it is more commonly linked to a failure to effectively absorb vitamin B12 from the intestine rather than a dietary deficiency. Absorption of vitamin B12 requires the secretion from the cells lining the stomach of a glycoprotein, known as intrinsic factor. The vitamin B12 intrinsic factor complex is then absorbed in the ileum (part of the small intestine) in the presence of calcium. Certain people are unable to produce intrinsic factor, and the subsequent pernicious anemia is treated with injections of vitamin B12.

Vitamin B12 can only be stored in small amounts by the body. Total body store is 2–5 mg in adults, around 80% of which is stored in the liver.