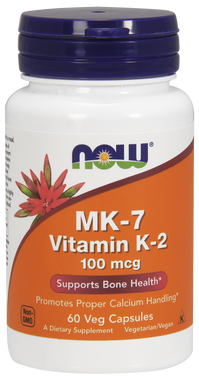 Vitamin K is well known for its role in the synthesis of a number of blood coagulation factors.* During recent years however, Vitamin K2 and its dependent proteins have been found to play a central role in whole-body calcium metabolism.* These Vitamin K2-dependent proteins are now known to be essential for normal bone mineralization, as well as for other critical functions unrelated to coagulation.* NOW® MK-7 contains a highly biologically active form of Vitamin K2 derived from non-GMO natto, a traditional Japanese fermented soyfood.*

Suggested Usage: As a dietary supplement, take 1 capsule daily with a meal.

Caution: For adults only. Consult your physician if pregnant/nursing, taking any anti-coagulant drugs (such as warfarin, coumadin, heparin), or other medication, or have a medical condition. Keep out of reach of children.

Do Not Eat Freshness Packet.

Store in a cool, dry place after opening.

*These statements have not been evaluated by the Food and Drug Administration. This product is not intended to diagnose, treat, cure or prevent any disease.