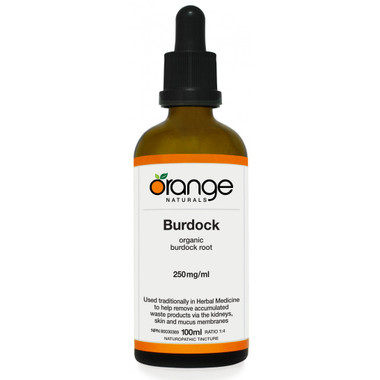 Do some internal housecleaning with Burdock. Burdock turns on the body’s taps and clears out all the waste that’s rounded up by the liver. It helps to stimulate the body’s natural detoxification processes, including sweating and urination. It can also help to ease any achiness in your bones by scrubbing out deposits that have hardened around the joints. Don’t wait until spring to start cleaning out those cobwebs!

Common but not so Common

Burdock (arctium lappa) is a common plant found along the sides of roads in North America and Europe. The root is greyish-brown on the outside and whitish on the inside. Both the tea and tincture can be used for stomach complaints and it is reported to be able to neutralize and eliminate poisons (like alcohol) in the body. Burdock cordial can still occasionally be found in smaller shops in Europe – a reminder of its popular cleansing reputation.

Burn Carbs and Get Your Vitamins and Minerals

Burdock contains a type of starch called inulin which is important for the metabolism of carbohydrates. The inulin in Burdock is said to be the source of most of its healing powers. Burdock also contains a lot of vitamin C and iron, some vitamin A, B-complex vitamins and Vitamin E and small amounts of sulphur, silicon, copper, iodine and zinc. Preliminary research has pointed to its ability to stimulate anti-inflammatory and free radical scavenging activities.

Burdock, known as a “blood purifier”, has been used for years in traditional Herbal Medicine to help remove accumulated waste products via the kidneys, skin and mucous membranes. It was also frequently used to help alleviate the pain associated with rheumatism. Burdock provides bitter stimulation of digestive juice secretion – especially bile. It also supports kidney function and is a mild laxative. Historically it has been used to treat cystitis, arthritis, gout and eczema.

Each ml contains 250 mg of organically grown burdock root (Arctium lappa). It is a 1:4 root extract.

Adults: Take 4ml, 2 times per day on an empty stomach.

Do not use if you are pregnant or allergic to plants of the daisy family.

Consult a healthcare practitioner prior to use if you are breastfeeding or if you have diabetes.

Hypersensitivity has been known to occur - discontinue use if so.