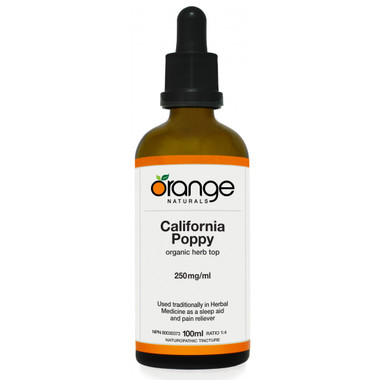 If you rarely visit la la land, California Poppy may be just the ticket. The state flower of California is known not only for its sedative action, but for its ability to relieve nerve pain that can cause insomnia. Our wise elders used it for treating toothaches and a variety of other ailments, including sleep troubles, nervousness and general aches and pains.

California Poppy is a spectacular flower that is both beautiful and medicinal. It is an annual plant that graces gardens all over the west coast. Today, California Poppy is used primarily for the relief of insomnia, nervous disorders and nerve pain, as well as a possible remedy for anxiety, headaches, back pain and restless legs syndrome. While it is a close relative of the opium poppy, California Poppy doesn’t contain any actual opium. Its therapeutic action is accredited to a different set of alkaloids from those found in opium.

Research into the alkaloids found in California Poppy is ongoing. It is thought that one component, californidine, acts on the central nervous system to promote sleep, while others, including protopine, cryptopine and allocryptopine, enhance certain brain chemicals that inhibit nerve impulses, resulting in a calming effect on the brain, peripheral nerves and muscles. The alkaloids in California Poppy produce a milder effect than opiates and are non-addictive, with no disorienting side effects.

Scientists are beginning to provide further evidence of California Poppy’s beneficial effects. Animal studies have demonstrated California Poppy extract possesses the ability to relieve peripheral nerve pain as well as anxiety. Like most other herbs, California Poppy contains a plethora of compounds that offer a range of benefits. Other alkaloids found in California Poppy have been shown in research to be anti-fungal in nature and thus may offer a future alternative to prescription anti-fungal medications, with fewer side effects.

So, relax in the arms of this beautiful flower. While it doesn’t contain opium, you may just feel euphoric after the good night’s sleep you’ll have had!

Adults: Take 4ml at bedtime on an empty stomach.

Do not use if you are pregnant.

Consult a healthcare practitioner prior to use if you are breastfeeding, or if sleeplessness persists continuously for more than 3 weeks.

Consumption with alcohol or other medications or natural health products with sedative or pain relieving properties is not recommended.

May cause drowsiness. Exercise caution if operating heavy machinery, driving a motor vehicle, or involved in any activities requiring mental alertness.