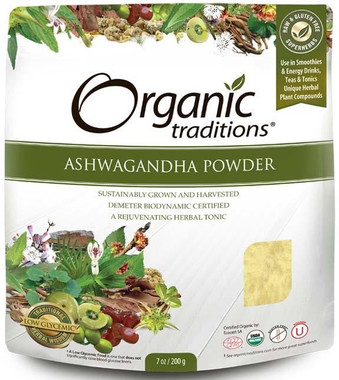 Ashwagandha is also known as “The Indian Ginseng” because its actions and uses are similar to those of Chinese Ginseng. As an adaptogenic herb, it is one of the most commonly used roots in Traditional Ayurvedic Medicine for increased stamina. It has also been traditionally used to promote a calm mind and encourage restful sleep. It is extensively used in India as a daily tonic and home remedy. Its Sanskrit name means “that which imparts the strength of a horse,” a name that suggests one of its traditional usages as a traditional Ayurvedic rejuvenative tonic for strength, energy and vitality. According to the energetic principles of Ayurveda, Ashwagandha is bitter, astringent and sweet in the Rasa taste energy, heating in action according to Virya and balancing for Vata and Kapha constitutional doshas, with a potential to aggravate Pitta in those with excess Pitta energy. It is considered a wonderful daily herb to support general well-being, vitality and health.Allergen Information: Produced in a facility that packages tree nuts (Almonds, Hazelnuts and Cashews). The facility is dairy-free, gluten-free, soy-free and peanut free. Storage Information: Refrigeration not required. Store in a cool, dry, dark place.Key Features and Benefits • Certified Organic, Gluten-Free, Kosher, Vegan, Non-GMO, Raw • Gentle, Rejuvenating and Strengthening Ayurvedic Tonic • Bitter, astringent and sweet taste profile • No added flavors, fillers, preservatives, additives, sweeteners, carriers, stabilizers or excipients