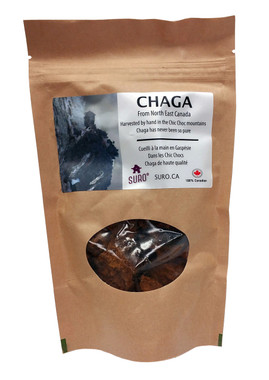 Suro pure Chaga is harvested by hand in the North East Canadian Chic Choc Mountains, where it naturally thrives. Well known for its high antioxidant levels, CHAGA has been used for generations in Russia and other countries for its anti-cancer properties.

Chaga (Inonotus obligus) is a mushroom that typically grows on birch trees in the wild forests of North East Canada and Siberia. In Russia, it has been traditionally used in herbal medicine, and is often referred to as the “King of Medicinal Mushrooms.”

This ongoing tradition has interested many researchers from the scientific community. Taking a look at the medical publications show that there is much research being done to validate this long-used and trusted herbal medicine.

Chaga has been traditionally used for its ability to shrink benign and malignant tumors. For some patients in Russia, it is the preferred method when faced with alternative treatments such as radiotherapy and surgery. Chaga is also very well known for its antioxidant properties and, of course, for their positive effects on one’s health and immunity.

It is known to enhance global immunity, being:

Chaga contains antioxidants, polysaccharides, polyphenols, triterpenes like betulinic acid, minerals, vitamins B2 and D2 and many other beneficial nutrients.

Betulin and betulinic acid are naturally found in birch bark. They will be concentrated in the Chaga that forms on the tree, and converted to a form that is more easily ingested by humans.

Direction:
Pour 1 liter of hot water (180F or 82C) over one ounce of chaga chunks. Allow the chunks to soak in hot water for a minimum of 90 minutes. Filter and allow chunks to dry and re-use them 2 or 3 times. Store the chaga tea in the refrigerator and use within 1 week.