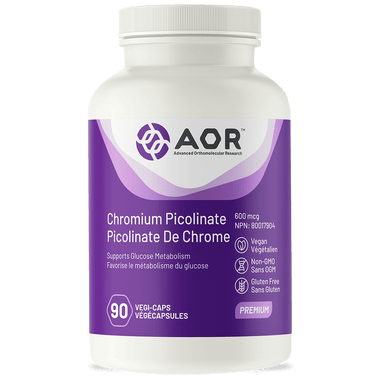 Controls Glucose Levels
Chromium is an essential trace mineral. It's most important function is maintaining healthy levels of blood sugar. This is particularly important for individuals with impaired insulin function. Chromium also helps to balance lipoprotein levels and prevent plaque buildup in arteries.

Blood Sugar and Heart Health
Chromium enhances the roles of insulin, allowing insulin to travel through the body and control blood sugar levels. Many studies have suggested that chromium supplementation can help those with type II diabetes or abnormal blood sugar. Low levels of chromium have been associated with high cholesterol, as well as high blood sugar. Since insulin resistance and high blood sugar are thought to be risk factors for heart disease, chromium may be beneficial in helping to prevent cardiovascular problems. Chromium may also have benefits during athletic exercise, since maintaining stable glucose levels is important for endurance sports.

Glucose Regulator
Chromium works like a key to unlock the hormone insulin, allowing it to travel throughout the body and perform all of its roles. Insufficient quantities of chromium in your body -a condition that affects most North Americans- may cause high blood sugar and high cholesterol. Without insulin, glucose cannot exit the bloodstream and enter the body's cells. Chromium helps the process along by acting as a cofactor to insulin, "unlocking the door" to the cell membrane, thus allowing glucose to enter the cell.

Chromium's Role In Diabetes
As chromium picolinate has been shown to have a beneficial effect on glucose regulation, some studies have tested whether it can have similar benefits for those suffering from diabetes, abnormal blood sugar levels, or some other sort of impaired insulin function. The results of these studies have been positive. Several small, double-blind trials have suggested that chromium picolinate supplementation may help those with type II diabetes or abnormal blood sugar. One such trial studying overweight people at risk of developing diabetes found that chromium helped the body respond better to insulin. Another randomized, placebo-controlled trial found that chromium supplementation shortens QTc interval which, when prolonged, is a powerful predictor of total mortality, cardiac death, and future stroke in patients with type 2 diabetes mellitus. Multiple studies have been carried out on those with diabetes, showing marked improvements in blood sugar levels.

Heart Disease Prevention
Insulin resistance and elevated blood sugar levels appear to be risk factors for heart disease, and some scientists have found that higher chromium intake lowered the risk of heart attack. These studies coincide with some authorities' characterization of "metabolic syndrome X." Syndrome X is the combination of impaired blood sugar control, high cholesterol, weight gain, and high blood pressure, all of which contribute heavily to heart disease. While the existence of syndrome X is itself controversial, chromium picolinate has been indicated as a partial remedy for at least the first condition. However this first condition, namely stabilized blood sugar levels, is arguably the single most important factor of syndrome X due to its intrinsic effects on the other factors of cholesterol, weight gain, and blood pressure.

Safety
Chromium has only recently been classified as an essential mineral and its functions in the body are still being studied. Even so, chromium picolinate is essential for proper glucose function and has been shown to provide significant assistance to those struggling to regulate their blood sugar levels. The connotations for weight loss are also quite overt. Chromium picolinate has been examined for athletes, both recreational and competitive. This is due to the fact that maintaining a stable glucose level is paramount in any endurance sport, especially one requiring periodic bursts of anaerobic activity.

Suggested Use: Take one capsule daily, or as directed by a qualified health care practitioner.

Cautions: Consult a health care practitioner prior to use if you have a kidney disorder or for use beyond 6 months.
Pregnancy / Nursing: Do not take.