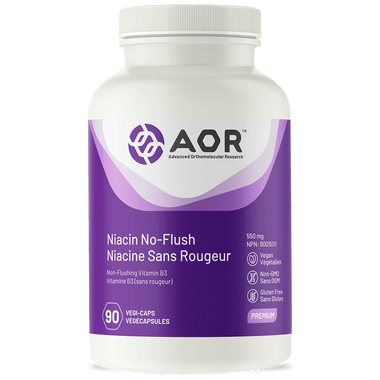 A Non-Flushing Form of Niacin or Vitamin B3

Niacin, the most common form of vitamin B3, often causes an uncomfortable symptom known as the “niacin flush,” which is a reddening and irritating of the skin. Many different forms and delivery methods such as niacinamide, sustained release niacin, enteric coated tablets and others have attempted
to solve this issue. Unfortunately, some of these alternatives have negative effects of their own, such as a loss of effectiveness, potential liver injury and gastrointestinal upset. AOR’s Niacin No-Flush is inositol hexanicotinate, a compound that yields vitamin B3 in a slow-release manner but without the
other potentially negative side effects and without the flushing effect.

Niacin is also the only true dietary supplement shown to reduce cardiovascular and cerebrovascular events. It is primarily used in reducing LDL cholesterol and has been shown to elevate HDL (‘good’ cholesterol) at a rate more than 5 times that of the drug Mevacor. In addition, niacin helps reduce Lp(a) and fibrinogen, two contributors to the formation of blood clots and hard arteries. Inositol hexanicotinate in particular has been shown to increase blood flow to the limbs in various peripheral vascular diseases, allowing the tissues to heal.

This product contains no other ingredients that are not listed on the label such as wheat, gluten, corn, nuts, peanuts, sesame seeds, sulphites, mustard, soy, dairy, eggs, fish, shellfish or any animal byproduct.

Suggested Use: Take 1 capsule daily with/without food, or as directed by a qualified health care practitioner.

Cautions: Do not exceed the recommended dose except on the advice of a physician.

Pregnancy/Breastfeeding: Consult a qualified health care practitioner prior to use.