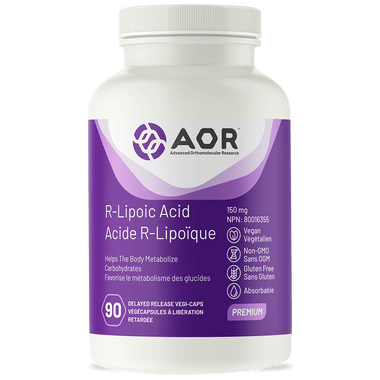 The Most Effective Form of Lipoic Acid

This powerful anti-aging nutrient has been shown to mimic some of the effects of caloric restriction, the only proven method of extending lifespan. It does so by protecting the mitochondria against free radical damage. A study in a short-lived strain of mice demonstrated that R-lipoic acid can dramatically increase its lifespan. Neither S-lipoic acid nor conventional alpha-lipoic acid had any significant effect. R-Lipoic acid is a versatile antioxidant known for its ability to protect the brain and nerve cells from free radicals and heavy metals such as iron that have been linked to cognitive and neurodegenerative diseases.

There is not more than 7 mg of S-lipoic acid per capsule.
This product contains no other ingredients that are not listed on the label such as wheat, gluten, corn, nuts, peanuts, sesame seeds, sulphites, mustard, soy, dairy, eggs, fish, shellfish or any animal byproduct.

Suggested Use: Take 1 capsule three times daily with or without food, or as directed by a qualified health care practitioner.

Cautions: Consult a health care practitioner prior to use if you have diabetes.