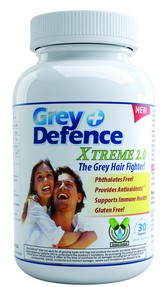 Grey Defence® is a leading anti-aging dietary supplement that reverses grey hair. The body’s antioxidative defensive network consists of antioxidant enzymes Superoxide Dismutase (SOD), Catalase and Glutathione Peroxidase. This network efficiently neutralizes free radicals and hydrogen peroxide protecting both our cells as well as prevents us from greying when we are young. As we get older or due to long term stress, our body’s antioxidant defence system is weaken because of a reduction in the production of these antioxidant enzymes.

Grey Defence® is a proprietary blend of vitamins, essential amino acids and antioxidants enzymes that has been scientifically shown to play a critical role in the metabolic oxidation of hydrogen peroxide in hair follicles.

Grey Defence® is manufactured in a GMP facility and it serves as an assurance to you the customer that Grey Defence® meets the highest level of safety and efficacy during production.