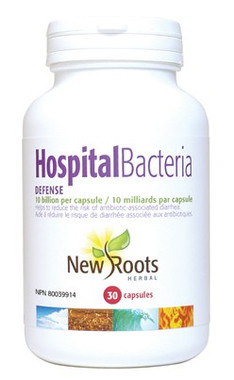 Helps to Reduce the Risk of Antibiotic-Associated Diarrhea.

Adults and children: Take 1–3 capsules daily or as directed by your health-care practitioner.

Hospital Bacteria Defense is composed of Saccharomyces boulardii, considered a nonpathogenic, noncolonizing baker’s yeast species, which is very closely related to brewer’s yeast, also known as S. cervesiae. We refer to it as a specific beneficial yeast probiotic. S. boulardii is recognized as a yeast and is not related to the Candidaspecies (Candida albicans, tropicalis, etc.), which can cause pathogenic infections in the gastrointestinal and genitourinary tracts. Hospital Bacteria Defense is used to prevent diarrhea associated with antibiotic use or to protect when coming into contact with Clostridium difficile bacteria.

C. difficile, is a Gram-positive anaerobic bacterium that is now recognized as the major causative agent of colitis (inflammation of the colon) and diarrhea that may occur following antibiotic intake. C. difficile infection represents one of the most common nosocomial (hospital-related) infections around the world.