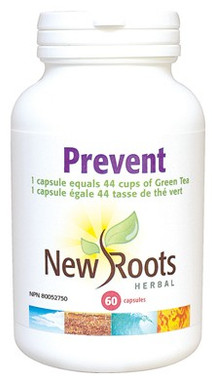 Prevent combines nature’s most powerful pigments and antioxidants as well as the strongest form of green tea with cutting-edge nutraceuticals for the ultimate disease-protecting formula.

Adults: Take 1 capsule daily with food or as directed by your health-care practitioner. Take with a meal containing oil/fat.

Prevent and the Power of Green Tea

The green tea in Prevent has a special therapeutic charge of 75% epigallocatechin gallate (EGCG)—a powerful polyphenol that helps fight disease. This isolate in green tea has been proven to be effective in preventing breast, lung, mouth, stomach, and prostate diseases by preventing cells from becoming sick, inhibiting growth of damaged cells, and attacking or inducing death in diseased cells.

An estimated 153,100 new cases of cancer occur in Canada every year. On average, 1,353 Canadians die of cancer every week.

Studies suggest that EGCG may boost metabolism and help burn fat. In a French study, resting metabolic rate increased by 4% after 90 mg of EGCG was consumed three times per day. Scientists at the University of Chicago’s Tang Center for Herbal Medicine Research have found that EGCG caused rats to lose up to 21% of their body weight. Rats injected with EGCG derived from green tea leaves lost their appetites and consumed up to 60% less food after seven days of daily injections. EGCG seems to desensitize leptin receptors (leptin may play a role in appetite) in the study of animals. Most green tea products on the market reach a maximum of 55% EGCG. New Roots Herbal’s green tea extract contains the highest quantity of EGCG available in supplement form. Each 500 mg capsule contains 75% EGCG.

The leaf bud and first leaves are richest in epigallocatechin gallate. Green-tea polyphenols are potent antioxidant compounds that have demonstrated to be 100 times greater antioxidant protection than vitamin C and 25 times greater than vitamin E at protecting cells and their genetic material, DNA, from damage believed to be linked to disease. EGCG carries twice the antioxidant punch of resveratrol found in red wine. In addition to exerting antioxidant activity on its own, green tea may increase the activity of antioxidant enzymes.

Curcumin, 95% Curcuminoids — Antioxidant, anti-inflammatory and anticarcinogenic properties of turmeric and curcumin are undergoing intense research. Tests in Germany found that “[a]ll fractions of the turmeric extract preparation exhibited pronounced antioxidant activity[…]” Turmeric extract tested more potent than garlic, Devil’s claw, and salmon oil. Another study indicates that curcumin slows the development and growth of a number of types of cancer cells. Researchers now define curcumin as a broad-spectrum anticancer agent, where its detoxifying enzymes indicate its potential value as a protective agent against chemical carcinogenesis and other forms of electrophilic toxicity. The significance can be implicated in relation to cancer-chemopreventive effects of curcumin against the induction of tumours in various target organs. There is a recent study that states curcumin may inhibit some chemotherapy drugs for breast cancer.

N-Acetylcysteine supports glutathione to interact with toxic byproducts and promotes their excretion through the liver. These substances include carbon tetrachloride, chloroform, and carbon monoxide; alcohol; such heavy metals as mercury, chromium, and boron; and the microorganisms aflatoxin and Escherichia coli. By helping to rid the body of environmental toxins and by fighting free radicals, NAC may play a role in preventing disease. NAC might also slow the growth of diseased tissues in these ways. Clinical trials are underway to explore this possibility. Interestingly, one study did find that NAC reduced nausea and vomiting caused by chemotherapy.

Resveratrol 50% is a type of antioxidant polyphenol called a phytoalexin, a class of compounds produced as part of a plant’s defense system against disease. It is produced in the plant in response to an invading fungus, stress, injury, infection, or ultraviolet irradiation. Red wine contains high levels of resveratrol, as do grapes, raspberries, peanuts, and other plants. Resveratrol has been shown to reduce tumour incidence in animals by affecting one or more stages of cancer development. It has been shown to inhibit growth of many types of cancer cells in culture. Evidence also exists that it can reduce inflammation. It also reduces activation of NF-kappa B, a protein produced by the body’s immune system when under attack. Incorrect regulation of this protein affects cancer cell growth and metastasis.

Zeaxanthin 20% is an antioxidant that destroys harmful free radicals, generated by exposure to light and which initiate oxidative damage in the eyes and skin. These xanthophylls provide protection against free radicals that can damage cells and DNA and thus cause disease. Zeaxanthin may also improve the cytotoxic action of chemotherapy drugs.

Astaxanthin 1.5% kills free radicals in your body, staving off age-related diseases like macular degeneration by preventing these unstable molecules from damaging your cells. Astaxanthin also boosts the functioning of your immune system by increasing the number and activity of T cells and macrophages, two kinds of protective cells that fight infection and disease.

Prevent has a similar formula to that of Prevent 44; the difference is that we have removed the isolate curcumin 95% in Prevent 44, as it may interfere with chemotherapy treatments. Prevent should be used before and only 30 days after treatment. Prevent 44 can be used during treatment and will help the body cope with the common side effects related to these treatments.