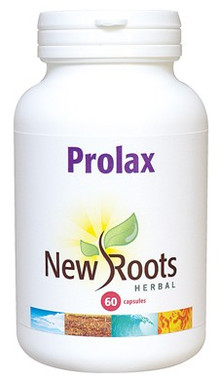 Prolax is an herbal alternative for the relief of simple constipation. This blend of mild cathartics (agents which promote intestinal elimination) will help your body regain control of the elimination process.

Adults (19 and over): Take 1–6 capsules in a single dose two or three times per week, up to once daily, at bedtime. Allow at least 6–12 hours for laxative effect to occur. Take a few hours before or after taking other medication or health products. If results are not observed, the frequency may be increased up to once daily. Consult a health-care practitioner for use beyond 7 days. The correct individual dose is the smallest required to produce a comfortable soft-formed stool.

Prolax is a herbal alternative formulation, which aids in the relief of simple constipation. This blend of mild cathartics (agents which promote intestinal elimination), in combination with improved dietary habits, will help your body regain control of the elimination process.

Constipation may be chronic, acute, or a simple diet-induced irregularity. Proper cathartic treatment regimens for both chronic and acute constipation are built around the sensible use of several herbs. The proper treatment of diet-induced constipation is to routinely include prunes, bran, and fibre-containing foods in your diet, and to reduce use of caffeine and alcohol.

Butternut, over the last century, has been known as one of the mildest and safest efficacious laxatives available. Butternut root bark is well-documented for its cathartic properties. Butternut is good not only as a laxative, but also as a treatment for liver disorders and intestinal sickness.

The part of the cascara sagrada or “sacred bark” (Rhamnus purshiana) tree that is used is its bark. This tree is native to the northwest Pacific coast and has been used by many tribes of people indigenous to this region, stretching from British Columbia to California, as a remedy for constipation and upset stomachs. Cascara sagrada is known worldwide as a natural mild laxative that works.

Turkish rhubarb, in small doses, makes an excellent strengthening tonic for the stomach; in large doses, it acts as a laxative. Rhubarb root’s purgative action is useful in constipation, but also has an astringent effect following this. It therefore has a truly cleansing action on the gut, removing debris, and has antiseptic properties as well.

Licorice, the grandfather of Chinese herbs, is mostly used as a flavouring for candy, cough drops, syrups, tonics, and laxatives. Licorice is included in most herb combinations to balance the other herbs and to promote vitality. It is a source of magnesium, silicon, and thiamine. Besides being a mild aperient (laxative) itself, it helps to counterbalance the discomforting effects that may result from laxative use. It provides a mild boost to the adrenal system, that may be stressed in certain debilitating conditions for which laxatives are often suggested. Most importantly, licorice root protects and heals distressed mucous membranes of the intestinal tract.