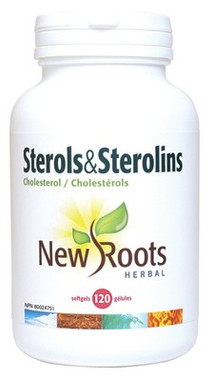 Sterols are plant fats and alcohols that have gained in popularity and recognition in recent years. They have a positive effect on negative cholesterol levels and HDL/LDL ratios. Many trust them for immune boosting and modulation.

Adults: Take 3 softgels daily with food or as directed by your health-care practitioner.

Phytosterols and sterolins are plant fats and alcohols. They were originally suspected of being good immune modulators, but more recently, their ability to modulate and lower cholesterol has moved to the forefront.

You’ll find sterols and sterolins in more and more fortified functional foods. Recently, the FDA approved the following claim for phytosterols: “Foods containing at least 0.4 g per serving of plant sterols, eaten twice a day with meals for a daily total intake of at least 0.8 g, as part of a diet low in saturated fat and cholesterol, may reduce the risk of heart disease.”

Phytosterols have been shown to inhibit the uptake of both dietary and endogenously produced (biliary) cholesterol from the intestine. There are several proposed mechanisms by which phytosterols decrease serum cholesterol levels; one of them suggests that cholesterol in the intestine, already marginally soluble, is precipitated into a nonabsorbable state in the presence of added phytosterols. The main theory is based upon the fact that cholesterol must enter bile salt– and phospholipid-containing mixed micelles in order to pass through intestinal cells and be absorbed into the blood stream.