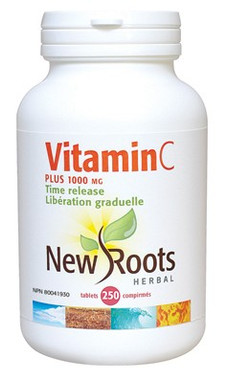 Pure USP-grade ascorbic acid in powder form provides a highly bioavailable source of this vitamin we can’t synthesize on our own. Vitamin C Plus is formulated with rosehips and bioflavonoids for added antioxidant protection.

Adults: Take 1 tablet daily or as directed by your health-care practitioner.

Did you know that vitamin C isn’t essential to all animals? However, it is for us, humans. It isn’t a necessary component of diet, at least for all mammals with the exception of guinea pigs, fruit eating bats, the red-vented bulbul bird, and primates—which includes us. All other species make their own.

They do this by converting glucuronic acid derived from glucose into ascorbic acid (C6H8O6). Three enzymes are required to make this conversion; one of these enzymes, or part of the enzyme system, is missing in primates. Irwin Stone proposed, in 1965, that a negative mutation may have occurred in these species so as to lose the ability to produce vitamin C. In primates, this is thought to have occurred in the region of 25 million years ago.

Unlike other vitamins, vitamin C is required in large amounts, which could only be supplied by a tropical diet high in fruit and other vegetation. If sufficient vitamin C could be obtained from such a diet, the quantity of glucose normally used to synthesize vitamin C could be channelled towards energy production. This could conceivably have been an advantage for primates or other species.

Dr. Jungblut, an early pioneer of vitamin C therapy in the 1930s, discovered that only we primates and guinea pigs were susceptible to scurvy as well as anaphylactic shock, pulmonary tuberculosis, diphtheritic intoxication, a poliomyelitis-like viral infection, and a viral form of leukemia; none of the vitamin C–synthesizing laboratory animals had susceptibility to these diseases. This is perhaps one of the first observations that led to the idea that susceptibility to viral infections could be a consequence of vitamin C deficiency.

The fact that almost all species continue to make vitamin C suggests that the amount of vitamin C generally available from the diet is not enough for optimum nutrition, except in exceptional circumstances such as a tropical environment. Under normal circumstances, the daily amount produced, adjusted for comparison to a 70 kg man, is somewhere between 3 000 mg and 15 000 mg, with an average of 5 400 mg.

While a mere 60 mg a day can prevent scurvy, the deficiency disease first identified by Dr. James Lind in 1753, it would be illogical to assume that this is the optimal dose. A survey of doctors in the US found that those who were healthiest consumed at least 250 mg of vitamin C per day. A recent survey has shown that a person’s vitamin status is a good predictor of their mortality risk. High blood vitamin C levels indicate a low risk for cardiovascular disease as well as for certain types of cancer and other immune based diseases. Optimal intakes to reduce risk of such conditions would appear to be at least 500 mg per day.

But aren’t you simply making expensive urine when you take large amounts of supplements? Dr. Michael Colgan investigated this often-made rebuttal. He investigated how much vitamin C we use by giving increasing daily doses and measuring excretion. Only a quarter of the subjects reached their vitamin C maximum at 1 500 mg a day; more than half required over 2 500 mg a day to reach a level where their body could use no more. Four subjects did not reach their maximum at 5 000 mg. Increasing vitamin C intake from 50 mg to 500 mg tends to double serum vitamin C levels; increasing intake to 5 000 mg a day will double serum levels again.

Vitamin C protects the bowel, kidneys, and bladder on the way out. As Dr. Michael Colgan points out, the average victim of bowel or bladder cancer in the US spends $26 000 for treatment—mostly to no avail.

It is valid to infer from this brief history of evolution, a comparison with other species, and average excretion rates, that optimal vitamin C levels are probably above 1 000 mg, with plenty of room for individual variation.

What about “hard evidence”? What levels are required to ensure maximum function of enzymes and body systems dependent on vitamin C? A quick review of some of vitamin C’s hundreds of biochemical roles will help us here. Vitamin C is required for the synthesis of collagen, our intercellular glue that keeps skin, lungs, arteries, the digestive tract, and all organs intact. It is a potent antioxidant protecting against free radicals, pollution, carcinogens, heavy metals, and other toxins. It is strongly antiviral and mildly antibacterial. Energy cannot be made in any cell, brain or muscle, without adequate vitamin C. The adrenal glands have a high concentration of vitamin C, which is essential for stress-hormone synthesis. Vitamin C is so central in so many chemical reactions in the body that, without it, life is simply not possible.