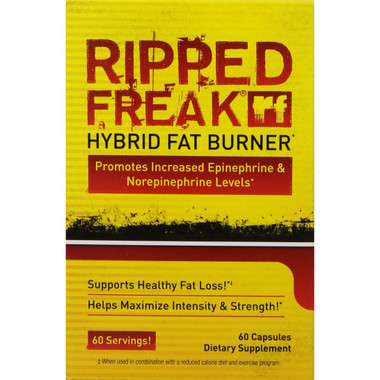 PharmaFreak Technologies Inc. is the first company to introduce "hybrid lipolytic compounds" to the market with the launch of RIPPED FREAK. The PharmaFreak R&D team is the first to discover the benefits of using the methyl gallate ester and have combined it with key fat-burning compounds found only in the RIPPED FREAK formula! On top of that, the RIPPED FREAK formula also contains five newly discovered methylated derivatives of (-)-epigallocatechin-3-O-gallate (EGCG) from green tea extract. As already explained, the methyl groups increase the lipophilicity and absorption into target cells, making the five EGCG derivatives found in RIPPED FREAK superior to the regular form of EGCG found in all other fat burners! Recommended Use: Take on capsule in the morning and (optionally) one capsule in the afternoon 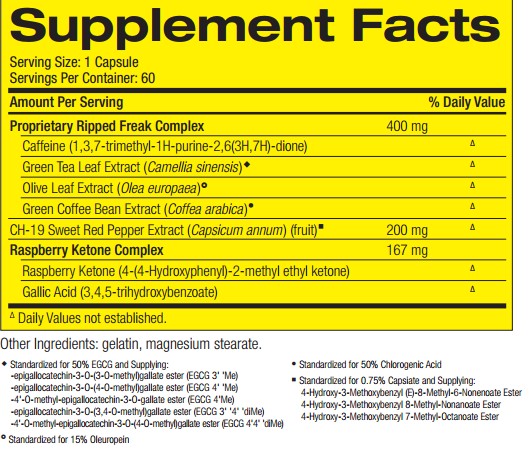 As a dietary supplement, we recommend that adults take 1 capsule of RIPPED FREAK with an 8-ounce glass of water on an empty stomach, first thing in the morning. Adults may take an OPTIONAL SECOND SERVING (1 capsule) early in the afternoon on an empty stomach at least 30 minutes before your next meal. On workout days, take 1 capsule 30-60 minutes before working out. Never take more than 2 capsules daily. For maximum results, drink at least ten 8-ounce glasses of water daily while combining RIPPED FREAK with a healthy diet and a hardcore training program.

DO NOT EXCEED 2 CAPSULES IN A 24-HOUR PERIOD AND DO NOT TAKE WITHIN 6 HOURS BEFORE BEDTIME.  Not for use by those who are sensitive to stimulants, such as caffeine. Use at your own risk. KEEP OUT OF REACH OF CHILDREN. Consult a physician before using this product if you have a medical condition, if you require surgery, or if you are taking prescription or over-the-counter medication. Not intended for persons under 18 years of age. Do not use if you are pregnant or nursing. One serving of this product (1 capsule) contains about as much caffeine as three 8-ounce cups of coffee and should not be taken by individuals wishing to eliminate caffeine from their diet. Do not use with caffeine-containing medications, foods and/or beverages as too much caffeine may cause nervousness, irritability, sleeplessness, and, occasionally, rapid heartbeat.