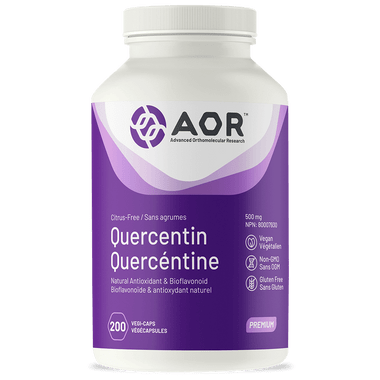 Quercetin is the flavone aglycone (non-sugar-bound) form of the polyphenolic flavonoid rutin. Quercetin is the major bioflavonoid in the human diet and an antioxidant for the maintenance of good health.

From Sneezing to Cell Damage
Quercetin is a dietary flavonoid with a variety of health benefits. It prevents oxidants from attacking nearby molecules. It alleviates allergies by stabilizing the membranes of certain immune cells to prevent them from releasing histamines. It also blocks enzymes that are responsible for producing inflammatory molecules that sensitize the body’s pain receptors.

Heart Health and Diabetes
Quercetin is a beneficial factor in cardiovascular health. It has been shown to lower mortality rates and incidences of heart attack, possibly by decreasing the formation of plaque building substances like LDL cholesterol. It is also able to inhibit a main enzyme in the pathway that leads to complications associated with diabetes, such as glaucoma, cataracts, and neuropathy.

An Antioxidant Flavonoid
Free radicals are byproducts of metabolism that disrupt the integrity of other molecules by stripping their electrons. Antioxidants are molecules that prevent free radicals from attacking nearby structures such as mitochondria, membranes, and DNA. There are many classes of dietary antioxidants, and flavonoids are one of them. Common sources of flavonoids are vegetables, fruits, and beverages such as wine and teas. Of the many flavonoid powerhouses, quercetin is a major player. As the most widely consumed flavonoid in the diet, quercetin is an important factor for human health. It has been widely used by Russians and Europeans to treat a variety of ailments.

Allergies
Quercetin counters allergic reactions by inhibiting enzymes responsible for the production of inflammatory mediators. Quercetin also inhibits histamine release by stabilizing immune cells that participate in allergic responses. Histamine is a signaling molecule that is responsible for many of the symptoms of allergies.

Cardiovascular Health
A long-term investigation of risk factors for chronic diseases in elderly men revealed that high intakes of quercetin and other flavonoids predicted lower mortality rates and incidences of heart attack (myocardial infarction). Researchers in the Netherlands believe that it is possible that quercetin and other flavonoids reduce risk of heart disease by lowering the formation of plaque-building substances, specifically oxidized low density lipoprotein (LDL).

This product contains no other ingredients that are not listed on the label such as wheat, gluten, corn, nuts, peanuts, sesame seeds, sulphites, mustard, soy, dairy, eggs, fish, shellfish or any animal byproduct.

Suggested Use: Take 1 capsule twice daily with food, or as directed by a qualified health care practitioner.

Cautions: Consult a health care practitioner for use beyond 12 weeks.