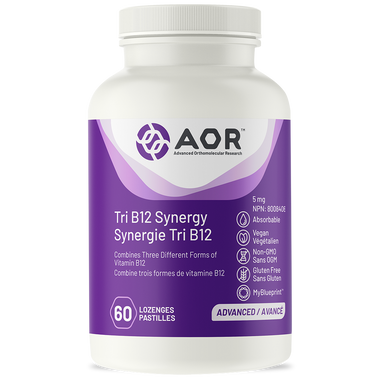 AOR’s Tri B12 Synergy is a combination of three independent and active forms of Vitamin B12. Methylcobalamin, Hydroxocobalamin and Adenosylcobalamin are three distinct cobalamin factors, each with their own unique benefits. When taken together, they provide an appropriate dose of bioavailable and active forms of B12 for comprehensive support in replenishing a deficiency. Vitamin B12 deficiencies can be caused by poor diet, impaired microbiota, or malabsorption, which is caused by diseases such as Crohn’s or Celiac or use of proton pump inhibitors such as antacids. Populations at particular risk include the elderly, vegans, smokers, chronic antibiotic use and even genetic factors. AOR has sourced its ingredients from European suppliers certified under the “Green Chemistry” certification system.

Vitamin B12 is used as a co-factor in enzymatic processes, which facilitate reactions in the body, like a key turning on a car ignition. Each form of cobalamin – methyl, hydroxyl, adenosyl – is vital to different cellular processes. Because in their absence key physiologic processes are compromised, a deficiency in B12 may cause a variety of symptoms over time, from fatigue to increased cardiovascular risks, poor balance, and cognitive changes or depression.

Methylcobalamin is involved in the critical metabolic process called methylation, as well as the production of red blood cells, neurotransmitter and DNA synthesis, and homocysteine recycling, which is important for heart health.

Adenosylcobalamin is active within the mitochondria (the powerhouse) of cells to support metabolic function, including carbohydrate and fat metabolism, energy production and to maintain a healthy nervous system.

Hydroxocobalamin acts as a precursor to both the above forms and has independent detoxifying actions. It is also bound to the body’s own transport molecules and serves as storage for later conversion, ensuring a longer lasting supply. 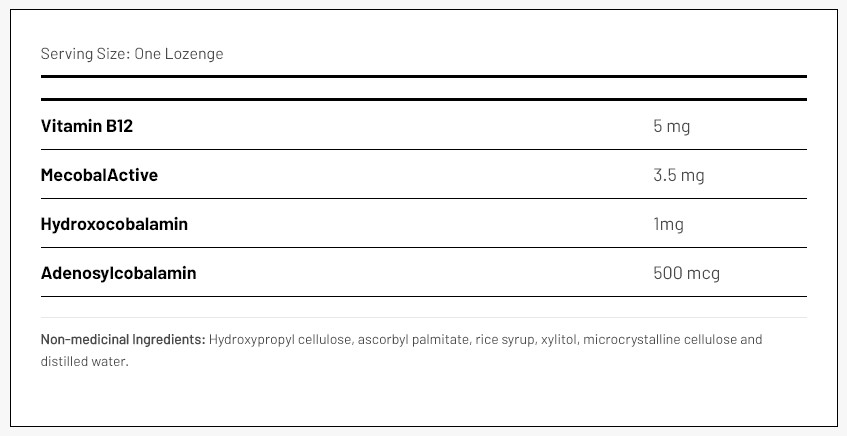 Suggested Use:
Dissolve one lozenge under the tongue first thing in the morning, or as directed by a qualified health care practitioner.