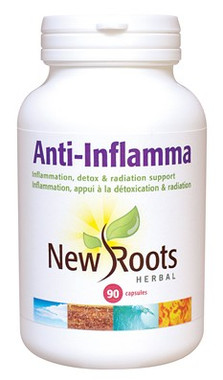 A synergistic blend of nutraceuticals and enzymes with COX-2 inhibitors that reduce inflammation.

Take 2 capsules three times daily with meals or as directed by your health-care practitioner.

New Roots Herbal has developed Anti-Inflamma that selectively blocks the enzyme cyclooxygenase-2 (COX-2). Blocking this enzyme impedes the production of the chemical messengers called prostaglandins that cause the pain and arthritis inflammation.

Chemotherapy can be an excruciating systemic therapy; this means it affects the whole body by traveling through the bloodstream. A recent study found that COX-2 levels were directly associated with levels of a growth factor that promotes the development of new blood vessels, a process called angiogenesis. In the cells missing theCOX-2 gene, vascular endothelial growth factor levels (tumour growth) were substantially lower; with an active COX-2 gene, vascular endothelial growth factor levels dropped after treatment with COX-2 inhibitors.