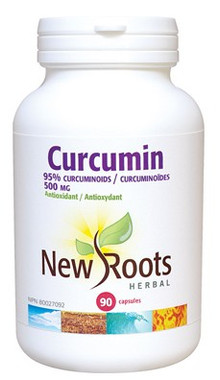 Our premium extract of curcumin is standardized to 95% curcuminoids.

Curcumin is an antioxidant extract found in turmeric root. Curcumin contains curcuminoids including curcumin, demethoxycurcumin, and bisdemethoxycurcumin. Turmeric in Latin is Curcuma longa. The roots of the plant are typically used as spice for Asian cuisine. Curcumin being the major component of turmeric, it has extensive scientific research demonstrating its potent antioxidant properties. Through its antioxidant mechanisms, curcumin supports colon health, exerts neuroprotective activity, reduces inflammation, has anticarcinogenic properties, and helps maintain a healthy cardiovascular system.

Curcumin interferes with melanoma cells. In vitro studies show that curcumin made melanoma (skin-cancer) cells more likely to self-destruct in a process known as apoptosis. The same study also found curcumin helped stop the spread of breast-cancer cells to the lungs of mice. The curcumin suppressed two proteins that tumour cells use to keep themselves immortal. Studies evaluating the role of curcumin in cancer continue to advance at a fast rate. More studies indicate that curcumin slows the development and growth of a number of types of cancer cells. Researchers now define curcumin as a broad-spectrum anticancer agent, where its detoxifying enzymes indicate its potential value as a protective agent against chemical carcinogenesis and other forms of electrophilic toxicity. The significance can be implicated in relation to cancer-chemopreventive effects of curcumin against the induction of tumours in various target organs. Another recent study states that curcumin may inhibit some chemotherapy agents for breast cancer. In laboratory studies, curcumin inhibits amyloid formation. Whether curcumin supplements help reduce the incidence of Alzheimer’s disease or help improve this condition is not known at this time. Studies in Germany reported that “[a]ll fractions of the turmeric extract preparation exhibited pronounced antioxidant activity […].” Turmeric extract tested more potent than garlic, Devil’s claw, and salmon oil.