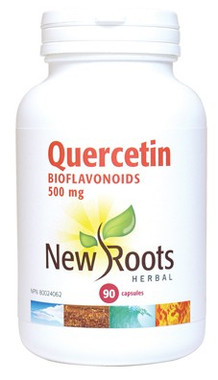 Quercetin has antihistaminic properties to relieve allergy and asthma symptoms. The anti-inflammatory properties reduce pain from disorders such as arthritis. Quercetin may also help reduce symptoms like fatigue, depression, and anxiety.

Adults: Take one capsule daily or as directed by your health-care practitioner.

Quercetin is widely distributed in the plant kingdom and is the most abundant of the flavonoid molecules. It is found in many often-consumed foods including apples, onions, tea, berries, and brassica-type vegetables, as well as many seeds, nuts, flowers, barks, and leaves. It is also found in medicinal botanicals, including Ginkgo biloba,Hypericum perforatum (St. John’s wort), Sambucus canadensis (elder), and many others. It is often a major component of the medicinal activity of the plant, and has been shown in experimental studies to have numerous effects on the body. All flavonoids have the same basic chemical structure, a three-ringed molecule with hydroxyl (OH) groups attached. A multitude of other substitutions can occur, giving rise to the many types of flavonoids. Flavonoids often occur in foods as a glycoside, meaning they have a sugar molecule (rhamnose, glucose, galactose, etc.) attached to the center ring.

Quercetin is the aglycone (meaning minus the sugar molecule) of a number of other flavonoids, including rutin, quercetin, isoquercetin, and hyperoside. Quercetin appears to have many beneficial effects on human health, including cardiovascular protection, anticancer activity, antiulcer effects, antiallergy activity, cataract prevention, antiviral activity, and anti-inflammatory effects. Flavonoids, as a rule, are antioxidants, and a number of quercetin’s effects appear to be due to its antioxidant activity.

Quercetin scavenges oxygen radicals, inhibits xanthine oxidase, and inhibits lipid peroxidation in vitro. As another indicator of its antioxidant effects, quercetin inhibits oxidation of LDL-cholesterol in vitro, probably by inhibiting LDL oxidation itself, by protecting vitamin E in LDL from being oxidized or by regenerating oxidized vitamin E. By itself, and paired with ascorbic acid, quercetin reduced the incidence of oxidative damage to neurovasculature structures in skin, and inhibited damage to neurons caused by experimental glutathione depletion. Flavonoids, particularly quercetin, are inhibitors of allergic (IgE-mediated) mediator release from mast cells and basophils. In reported laboratory studies, quercetin inhibited not only IgE-mediated allergic mediator release from mast cells but also IgG-mediated histamine and SRS-A (peptidoleukotriene). Interestingly, quercetin was much more potent as an inhibitor of the release of SRS-A than histamine, suggesting that it might also inhibit the biosynthesis ofSRS-A. Subsequently, it was demonstrated that quercetin was an effective inhibitor of 5-lipoxygenase; this property of the compound most likely accounts for its effect on peptidoleukotriene biosynthesis.

Quercetin is indicated in any inflammatory condition, as it inhibits the formation of the inflammatory mediators prostaglandins and leukotrienes, as well as histamine release. This may be especially helpful in asthma, as leukotriene B4 is a potent bronchial constrictor. Quercetin’s inhibition of xanthine oxidase decreases the formation of uric acid, and thus it may be of value in the treatment of gout. Animal studies have shown quercetin to be protective of gastric ulceration caused by ethanol, by inhibiting lipid peroxidation of gastric cells and/or by inhibition of gastric acid secretion. An interesting aspect of quercetin’s antiulcer effect is that it has been shown to inhibit the growth of Helicobacter pylori in a dose-dependent manner in vitro.