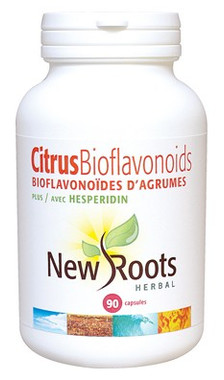 Bioflavonoids are natural products found throughout the plant kingdom. Bioflavonoids are polyphenols naturally present in fruits and vegetable. High concentrations of bioflavonoids can be found especially in citrus fruits such as rosehips, limes, lemons, grapefruits, oranges, and blackcurrants. The major bioflavonoids found in citrus fruits are diosmin, hesperidin, rutin, naringin, tangeretin, diosmetin, narirutin, neohesperidin, nobiletin, and quercetin. The synergistic blend of New Roots Herbal’s bioflavonoids consists of naringin from grapefruits, hesperidin from oranges, tangeretin from tangerine, and diosmin from lemons.

Citrus bioflavonoids and related substances are widely used in Europe to treat diseases of the blood vessels and lymph system, including haemorrhoids, chronic venous insufficiency, easy bruising, nosebleeds, and lymphedema following breast-cancer surgery. These compounds are thought to work by strengthening the walls of blood vessels.

High consumption of fruits and vegetables is associated with a reduced risk of cancer, due to their bioflavonoids content. Bioflavonoids act as an antimutagenic, are directly involved in scavenging free radicals, and have a role in the prevention of cancers in humans and animals. Bioflavonoids are found to strengthen the immune system, especially the gastrointestinal tract. They are also potent antiviral agents that can inhibit the replication of adenovirus, coronavirus, and rotavirus in cell cultures.

Bioflavonoids play an important role in slowing the aging process due to their antioxidant and cytoprotective properties. They also block lipid peroxidation, which is also linked to the aging process in cells. Bioflavonoids provide natural antibiotic, analgesic, and diuretic benefits, and possess antifungal activity against Candida albicans.