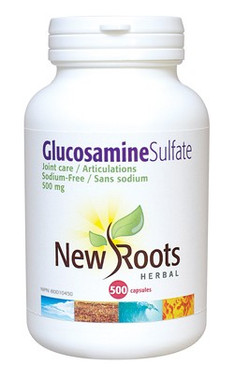 A factor in maintaining cartilage and joint health. Helps to relieve joint pain associated with osteoarthritis. Helps to protect against the deterioration of cartilage.

Adults: Take 1 capsule three times daily or as directed by your health-care practitioner. Use for a minimum of 4 weeks to see beneficial effects.

Glucosamine sulfate is quickly becoming one of the most popular alternative medicines for treating arthritis and joint pain. Why? Because many people are finding that they are able to stop using conventional drugs that cause undesired side effects. Glucosamine sulfate does not have side effects, since it is natural to your body.

The oral consumption of glucosamine salts provides the raw material needed for joint cartilage synthesis and repair. In nine European studies, the oral administration of glucosamine produced major reductions in joint pain, joint tenderness, and joint swelling. Improvements in joint function and overall physical performance were noted in these studies compared to placebo and/or the drug ibuprofen.

While ibuprofen worked faster than glucosamine in relieving pain, glucosamine was found to be attributed in the whole joint cartilage matrix. Studies show that glucosamine sulfate is a building block for cartilage. Glucosamine sulfate is absorbed quickly and easily. Lab tests show it is 98% absorbable and, because the molecules are small and simple, they actually penetrate the cartilage, where they can help build the special proteins that keep cartilage strong and healthy.

Glucosamine, which is formed in the body as glucosamine 6-phosphate (G6-P), is the most fundamental building block required for the biosynthesis of the classes of compounds, such as glycolipids, glycoproteins, glycosamino-glycans (formerly called mucopolysaccharides), hyaluronate, and proteoglycans, requiring amino sugars. Because it is a component of all these compounds, it is an essential component of cell membranes and cell-surface proteins, as well as interstitial structural molecules that hold cells together. Directly or indirectly, glucosamine plays a role in the formation of articular surfaces; tendons; ligaments; synovial fluid; skin; bone; nails; heart valves; blood vessels; and mucus secretions of the digestive, respiratory, and urinary tracts.