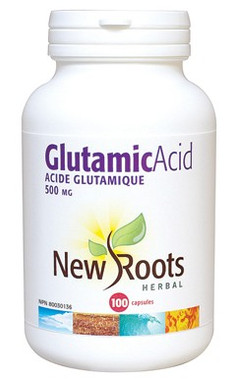 Glutamic acid is beneficial for the maintenance of good prostate health, muscle recovery, and brain function.

Adults: Take 3 capsules daily with meals and water or as directed by your health-care practitioner.

Glutamic acid is a nonessential amino acid used by the body to manufacture human protein, a vital component of all the body’s cells. This amino acid is labeled “nonessential” because, when the acids are lacking in the diet, the body can manufacture them. All nonessential amino acids must be on-hand before the body can synthesize protein; several have additional, more specialized roles as well. Glutamic acid is biosynthesized from a number of amino acids, including ornithine and arginine. When aminated, glutamic acid forms the important amino acid glutamine. Because it has a carboxylic acid moiety (functional group) on the side chain, glutamic acid is one of only two amino acids (the other being aspartic acid) that has a net negative charge at physiological pH. This negative charge makes glutamic acid a very polar molecule, and it is usually found on the outside of proteins and enzymes, where it is free to interact with the aqueous intracellular surroundings.

It is an organic compound, one of the 20 amino acids commonly found in animal proteins. Only the l stereoisomer occurs in mammalian proteins. Like aspartic acid, glutamic acid has an acidic carboxyl group on its side chain, which can serve as both an acceptor and a donor of ammonia, a compound toxic to the body. Once glutamic acid has coupled with ammonia, it is called glutamine and can as such safely transport ammonia to the liver, where the ammonia is eventually converted to urea for excretion by the kidneys. Free glutamic acid (not incorporated into proteins) can also be converted reversibly to ketoglutaric acid, an intermediate in the Krebs cycle, and as such can be degraded to carbon dioxide and water, or transformed into sugars. The acidic side chain of glutamic acid confers one negative charge under most conditions to proteins in which this amino acid is found, thus increasing the water solubility of the protein.

Glutamic acid is an important excitatory neurotransmitter, necessary in the metabolism of sugars and fats, and supports prostate function.