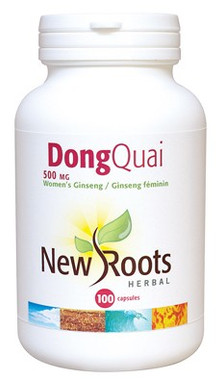 Dong quai has traditionally been used in China as a female tonic, useful in the relief of PMS.

Also called Chinese angelica, dong quai is the most important female tonic remedy in Chinese medicine. It is used for debility, poor vitality, convalescence, and tiredness in women, as well as for all kinds of gynecological, menstrual, or menopausal symptoms. Dong quai is the Chinese name for the root of the plant whose scientific name isAngelica sinensis, belonging to the family Apiaceae.

Dong quai has an immediate and stimulating effect on the uterus, especially during pregnancy or delivery. It has been clinically observed to strengthen and normalize uterine contractions. These effects are thought to be due to components of the volatile oil, particularly ligustilide. Symptoms such as menstrual pain and irregularities, spontaneous abortion, chills in hands and feet, anemia, and in some cases sterility have also responded well to dong quai. Animal and human studies have shown that dong quai also improves peripheral circulation and reduces blood viscosity. The research suggests that both ferulic acid and ligustilide are responsible for preventing spasms, relaxing vessels, and reducing blood clotting in peripheral vessels.

Dong quai has been used as the main female tonic in the Orient, while ginseng has been the traditional male adaptogen. Dong quai is used to provide energy, vitality, and resistance to disease. It regulates female hormones in the treatment of most menstrual and menopausal problems. It is a blood tonic that promotes production and circulation. It is therefore used in treating anemia, boils, headaches, venous problems, low immunity, and peripheral blood flow problems. Dong quai is used to prevent menstrual symptoms (amenorrhea, dysmenorrhea, PMS). It is a good uterine tonic (menstrual cramps) and is used to treat menopausal symptoms, anemia, low immunity, tiredness, poor vitality, debility, poor peripheral blood flow (intermittent claudication), lower blood pressure, atherosclerosis, and high cholesterol. Dong quai can also relieve pain and swelling. It tones and protects the liver against toxins and stimulates liver metabolism. It is a good anti-inflammatory, an analgesic, a sedative, an antispasmodic, and an immunostimulator.