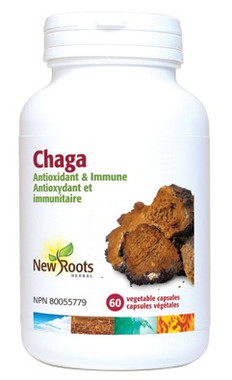 Source of fungal polysaccharides with immunomodulating properties. Source of antioxidants.

Adults: Take 2 capsules daily or as directed by your health-care practitioner.

Chaga (Inonotus obliquus) is a woody mushroom that grows on birch trees and has a black, scarred outer surface that resembles burnt charcoal, with a light interior. This tree fungus is found in Russia on black birch trees, and on white birch trees in parts of Canada, Japan, and northern Scandinavia.

Chaga is not as well-known as other medicinal mushroom superstars like turkey tail, maitake, and shiitake mushrooms; however, recent studies confirm that chaga belongs to this elite group because of the many health benefits it confers.

The primary active compounds discovered in chaga are triterpenes, sterols, and polysaccharides; agents that are known to strengthen immune function and cellular health.

The polysaccharide beta-glucan present in chaga is effective at inhibiting abnormal cell formations and at triggering an appropriate immune response.

Triterpenes are a class of compounds that give chaga a bitter taste. The triterpenes found in chaga exert a powerful immune-strenghtening influence by increasing the body’s resistance to disease and by lowering cholesterol levels.

Much of the worldwide research on chaga is focused on its ability to improve immune response, to lower high blood sugar, and to combat abnormal and mutagenic cell growth.

Chaga shows the capacity to not only stimulate immune response, but also to reduce inflammation. Its ability to multitask on so many levels renders it a powerful adaptogen.

An adaptogen is a type of herb that safely boosts the body’s resistance to stress and health challenges. Adaptogens generate a nonspecific whole-body response and exert a normalizing effect in the individual. Adaptogens have different effects on different people, depending on the body’s needs.

It strengthens the immune system and possesses strong antibacterial, antifungal, and antiviral properties. Chaga is anti-inflammatory, relieves pain, purifies the blood, and protects the liver. In addition of being a rich source of antioxidants, this remarkable fungus is considered to be an adaptogen that supports overall wellbeing.

Although a relative newcomer, this unique mushroom is gaining popularity as an important addition to the medicinal mushroom category.

Our chaga mushroom extract is standardized to contain a minimum 40% concentration of polysaccharides and comes in vegan-friendly capsules.