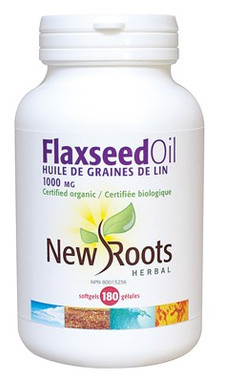 Adults: As a dietary supplement, take 2 softgels two to four times daily or as directed by your health-care practitioner.

Our flax is obtained from certified organically grown flaxseeds. It is extracted by expeller pressing at temperatures less than 38 °C without the use of solvents, such as hexane. The oil is protected during the extraction process from the damaging effects of heat, light, and oxygen.

Nutritionists, researchers, and even scientists believe that it could be the most important health-promoting supplement next to a multivitamin. Nearly every system in the body can benefit from flaxseed oil. Omega-6 and omega-3 fatty acids are known to play important roles in the formation of prostaglandins. Prostaglandins are cellular regulators, which control the inflammatory process in the body. Flaxseed oil, which contains large amounts of omega-3 fatty acids and adequate amounts of omega-6 fatty acids, is helpful in protocols which deal with cardiovascular disease, hypertension, arthritis, psoriasis, cancer, diabetes, and kidney disease.

Flaxseed oil also slows the aging process; shields the skin from wrinkling; and boosts production of new skin, hair, and nails. Studies have also shown that flax lowers risks of breast and colon cancer, restores proper metabolic function, and enables the body to excrete fat and toxins that are trapped in tissues.