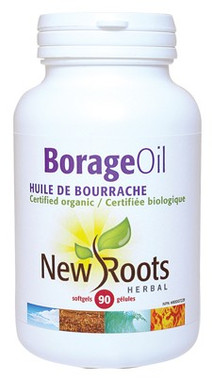 Adults: As a source of essential fatty acids for the maintenance of good health, take 2 softgels twice daily or as directed by your health-care practitioner.

New Roots Herbal Borage Oil is certified organic andnon-GMO. From its bristly stems to its blue star-shaped flowers, virtually all parts of the borage plant (Borago officinalis) have been used over the centuries for their healing properties and as a flavouring for foods. As early as the 1600s, Europeans mixed borage leaves and flowers into a wine that was renowned for relieving boredom and dispelling melancholy.

Like evening primrose oil and black currant seed oil, borage oil owes its healing power to the presence of essential fatty acids, the most important of which is gamma-linolenic acid (GLA), an omega-6 fatty acid. (While borage oil is often used interchangeably with evening primrose oil, borage oil boasts more than twice as much GLA.) Once processed by the body, GLA is converted into hormone-like substances that can either block inflammation or promote it; in borage oil, the GLA seems to calm inflammation overall, making it an attractive treatment option for arthritis and other inflammatory conditions. Nature’s most potent concentration of GLA comes in the form of borage seed oil (24%). A great deal of scientific research has been conducted with supplements rich in GLA, resulting in significant interest regarding the aforementioned health ailments, as well as for those affected by premenstrual syndrome, benign breast disease, eczema, psoriasis, obesity, and vascular disorders.

The essential fatty acids combined here have proven to impart a regulatory function on the body’s fatty-acid metabolism. Fat metabolism is as important, if not more critical, than our body’s metabolism of proteins and carbohydrates, as evidenced by the drastic rise in fat-related degenerative diseases such as vascular disease and strokes. Dietary essential fatty acids common to borage seed oil are ultimately converted to hormone-like substances known as prostaglandins. Prostaglandins are important for the regulation of a host of bodily functions including inflammation; swelling; pain pressure in the eye, joints, or blood vessels; secretions from mucus membranes and their viscosity; smooth muscle and autonomic reflexes; gastrointestinal system; arteries; ears; heart; water retention; blood-clotting ability; allergic response; rheumatoid arthritis; nerve transmission; steroid production; and hormone synthesis.

Past and present scientific research supports the use of essential fatty acid nutrients in promoting optimal health. Borage seed oil is recognized as nature’s richest source of GLA. These natural plant substances used alone have created a great deal of interest in the treatment of numerous health problems. Evidence exists to suggest the combination of omega-3 fatty acids with GLA may further complement the therapeutic result of either fatty acid used singularly.

Borage oil reduces the aches and pains of rheumatoid arthritis. Researchers from the University of Pennsylvania found that high doses of borage oil (1.4 g a day) led to a significant reduction in pain and swelling in arthritic joints when compared with cottonseed oil, which has no GLA. In a separate study, patients with active rheumatoid arthritis demonstrated fewer clinical signs of inflammation after taking GLA-rich capsules for several months, compared to those who took a placebo. Other researchers reported reduced damage to joint tissues, and less joint pain and swelling, in those rheumatoid-arthritis sufferers given very high GLA doses in the form of borage oil.

Borage oil relieves the discomforts of PMS, endometriosis, and fibrocystic breasts. By interfering with the production of inflammatory substances called prostaglandins, which are released during menstruation, the GLA in borage oil may help ease related cramping and pain. Borage oil may also reduce some of the breast tenderness that women feel before their periods, and calm endometriosis-associated inflammation. Many PMS sufferers are found to have unusually low levels of GLA in their systems, which is why supplements may help so much. In women with fibrocystic breasts, the oil’s essential fatty acids can minimize breast inflammation and promote the absorption of iodine, a mineral often found in abnormally low levels in those with this condition. While various studies suggest that GLA-dense oils can effectively treat PMS discomforts, more recent research has cast some doubt on these claims.

For the majority of ailments mentioned, take 1,000–1,300 mg of borage oil daily. While research studies tend to use relatively high dosages of borage oil, it’s important to stick to standard recommended dosages. As with all therapeutic products, we suggest that you consult the advice of a health-care practitioner.