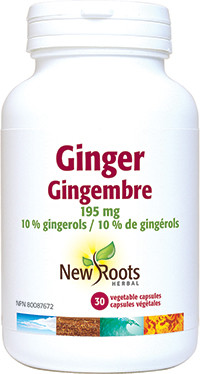 New Roots Herbal formulated a high-quality, pure ginger root capsule that combines the synergy of the whole rhizome with the potency of a standardized extract to maximize assimilation and effects.

Ginger is among the most widely used roots for both culinary and medicinal use. Recent research published in The Lancet and other prestigious journals have confirmed the traditional uses for ginger as a carminative and antitussive.

Ginger helps calm the stomach and ease nausea, vomiting, and motion sickness. It improves the appetite and soothes dyspepsia, flatulence, and indigestion. Ginger is also known for its expectorant action on the upper respiratory tract, encouraging the release of mucus and phlegm to calm coughs and colds. Finally, studies show that gingerol has a positive effect on primary dysmenorrhea, making ginger a plant of choice for a well-balanced hormonal health.