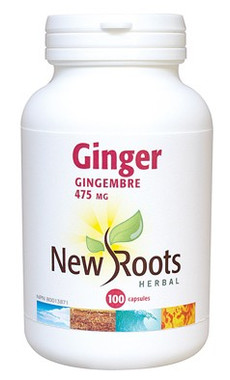 Adults, adolescents and children ≥ 6 years: Take 1 or 2 capsules twice daily with meals or as directed by your health-care practitioner. Take a single dose 30 minutes before travel and every 4 hours as necessary.

Ginger is one of the most widely used roots, both for culinary purposes and for medicinal ones. Recent medical studies have confirmed the ancient uses of ginger as a carminative, cholalogue, antitussive, and diaphoretic, as well as to help the absorption of other remedies throughout the body.

Most of the medicinal effects of ginger appear to be due to its pungent components, which are standardized in our capsules. Recent research published in The Lancet and other prestigious journals have confirmed the traditional uses for ginger; ginger was found more effective than drugs at treating motion sickness and nausea. Ginger is able to calm the stomach, promote bile flow, and improve the appetite. Ginger is also known for its expectorant action on the upper respiratory tract, suppressing coughs, and encouraging the release of mucus and phlegm. With its diaphoretic action, promoting sweating and increasing circulation, it is additionally useful for colds and low-grade fevers. Ginger tea has long been a standard remedy for sore throats, colds, and flus. Recent studies have found that ginger lowers blood cholesterol and reduces blood clotting. The pungent compound gingerol has been found to have a structure similar to that of the well-known anticoagulant aspirin, which may explain the similar effect that the two compounds have on prostaglandins. Ginger is also a very effective antibiotic agent and strong antioxidant.