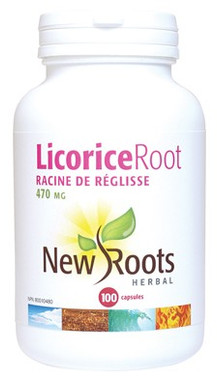 Traditionally used in herbal medicine as an expectorant to help relieve chest complaints, such as catarrhs, coughs, and bronchitis. Also used to help relieve inflammatory conditions of the gastrointestinal tract, such as gastritis in adults.

Adults: Take 1–2 capsules twice daily or as directed by your health-care practitioner.

Licorice has long been used for both culinary and medical purposes. Used for flavouring and sweetening candies and medical remedies, licorice also has other potent effects, particularly for ulcers and adrenal insufficiencies. Whole licorice is used for cases of adrenal insufficiencies and inflammation. Another more widely used form is the deglycyrrhizinated one, which is as effective as whole licorice in its ulcer-treating properties, but without any hypertensive side effects.

Licorice contains the glycoside glycyrrhizin, which has a similar structure and activity as the adrenal steroids. Licorice has an anti-inflammatory activity similar to that of cortisone and has been found useful for arthritis and allergies. In addition, licorice has been used for mild Addison’s disease and other adrenal insufficiencies, such as hypoglycemia.