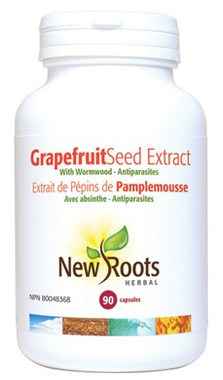 Our Grapefruit Seed Extract is made from a high-proanthocyanadin content. Quality assured.

Adults: Take 5 capsules twice daily or as directed by your health-care practitioner.

Grapefruit seed extract (GSE) contains mainly polyphenolic compounds, including quercetin, hesperidin, campherol glycoside, neohesperidin, naringin, apigenin, rutinoside, poncirin, etc. The polyphenols themselves are unstable, but are chemically converted into more stable substances that belong to a diverse class of products, called quaternary ammonium compounds. Some quaternary compounds—benzethonium chloride and benzalkonium chloride, for example—are used industrially as antimicrobials, but are toxic to animal life. The B vitamin choline is also a quaternary compound, but is nontoxic and even essential for maintaining healthy neurological function and fat metabolism.

GSE features the best of both worlds: the quaternary compounds derived from grapefruit exhibit broad-spectrum antimicrobial activity, while evidencing none of the toxic side effects of chemically derived quaternaries. According to an independent laboratory testing “Acute Oral Toxicity,” it would take at least 4 000 times the normal dose of GSE to produce a 50% chance of poisoning (called LD50).

Grapefruit seed extract is being used successfully in humans and animals alike to eliminate many types of internal and external infections caused by many types of parasites (single- and multicelled), viruses, bacteria, and fungus. It naturally detoxifies, enhances, and supports the immune system. It has been proven highly effective in numerous applications.

Grapefruit seed extract contains high levels of vitamins C and E as well as bioflavonoids. The important substances have an antioxidant action and can neutralize free radicals that damage cells and cause numerous illnesses.