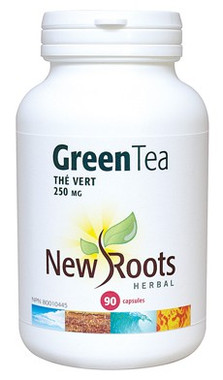 This 50% polyphenol extract neutralizes prooxidants and free radicals that attack lipids in the brain and heart, and has anticancer properties.

Green tea is the natural extract from the dried leaves of the tea plant. New Roots Herbal’s Green Tea Extract is standardized to 50% polyphenols, which ensures a consistent concentrated product delivering important antioxidant protection. Antioxidants protect the body’s cells and tissues. Powerful antioxidants, catechins have been shown in numerous studies to fight viruses, slow aging, and have a beneficial effect on health. Clinical tests have shown that catechins destroy free radicals and have far-reaching positive effects on the entire body.

Free radicals are highly reactive molecules that can damage the body at the cellular level, leaving the body susceptible to cancer, heart disease, and many other degenerative diseases. The Chinese have used green tea for thousands of years; recently, it was introduced on the American natural health market. Green tea is rich in bioflavonoid compounds that help fight damaging free radicals. One class of bioflavonoids and polyphenols is especially abundant in this herb. Specifically, the catechins (polyphenols with multiple linked ring-like structures) have extraordinary antioxidant ability, especially in the brain. They also interfere with damaging oxidation processes, thereby protecting the body’s cells and tissues.

Recent scientific studies illuminate green tea’s benefits for both the immune and circulatory systems. An important catechin found in green tea is epigallocatechin gallate (antioxidant, lowers serum glucose, maintains kidney health, and blocks angiogenesis). In fact, many doctors are now using high doses of green tea as an adjunctive therapy in the treatment of cancer and other diseases. The unique polyphenols that naturally occur in green tea are showing tremendous potential. They are also called EGCG and have been shown to be over 200 times more powerful than vitamin E in neutralizing free radicals that attack lipids in the brain.

Green tea is an amazingly powerful antioxidant, making it a benefit to both immune and circulatory health. It possesses antimicrobial properties that support immune system health. It has been found to protect against digestive and respiratory infections. It protects the heart by helping to prevent vascular blood clotting and reducing cholesterol.

Consider these other healthy lifestyle options: for further protection from free-radical damage, take New Roots Herbal’s Green Tea Extract with New Roots Herbal’s Coenzyme Q10 or Alpha-Lipoic Acid. Coenzyme Q10 is essential for the health of all body cells, tissues, and organs. alpha-Lipoic acid is often referred to as the “superantioxidant,” because it enhances the activity of other antioxidants in the body.