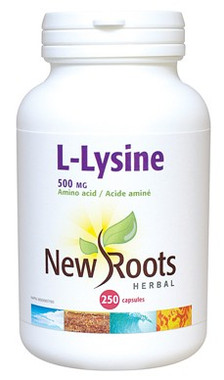 l-Lysine is one of the nine essential amino acids, which are necessary for balanced nutrition and good health.

Adults: Helps to reduce the recurrence, severity and healing time of cold sores. For cold sores, take 2 capsules three times daily with meals. May be used up to 6 months or as directed by your health-care practitioner.

l-Lysine is one of numerous amino acids that the body needs for growth and tissue repair. It is classified as one of the nine “essential” amino acids because our bodies do not produce it. Like all amino acids, lysine is a building block for proteins. It also plays a role in the production of various enzymes, hormones, and disease-fighting antibodies.

The richest sources of l-lysine include red meats, fish, and dairy products (milk, eggs, and cheese). Vegetables are generally a poor source of lysine, with the exception of legumes (beans, peas, and lentils). The daily recommended requirement for an adult is approximately 12 mg/kgbw, which represents approximately 800 mg. While most of the needs for lysine are met through dietary sources, supplements are now popular for treating and preventing specific ailments as well. Lysine has a net positive charge at physiological pH values, making it one of the three basic (with respect to charge) amino acids. This polar amino acid is commonly found on the surfaces of proteins and enzymes, and sometimes appears in the active site. Lysine is incorporated into proteins at the rate of 7% on a molar basis compared to other amino acids.

Researchers are exploring supplementation and the consumption of lysine-rich foods for lowering cholesterol, improving athletic performance, and enhancing recovery after surgery. Some professionals recommend taking lysine during an outbreak of canker sores to speed healing; the exact cause of these tiny but quite painful mouth ulcers is unclear, but most research indicates that a virus is responsible. However, there have been almost no clinical trials using lysine as a remedy for canker sores.

The most promising application of lysine is its use in managing and preventing painful and unsightly herpes sores caused by the herpes simplex virus (HSV). l-Lysine supplementation works by tilting the balance between lysine and arginine heavily in favour of lysine. This ameliorates herpes outbreaks because the herpes virus depends on the presence of arginine for its replication.

Lysine has also been shown to be useful in the prevention of atherosclerosis, a hardening of the walls of arteries caused by deposits of lipoproteins (fats). Lysine may be capable of loosening and preventing such deposits, therefore keeping artery walls flexible. Thus, there is less susceptibility for hypertension (high blood pressure). Hypertension is a major factor in heart attack and stroke.

Lysine supplementation increases the absorption of calcium and may reduce its excretion. As a result, some researchers believe that lysine may eventually be shown to have a role in the prevention and treatment of osteoporosis. Lysine works with other essential amino acids to maintain growth, lean body mass, and the body’s store of nitrogen.