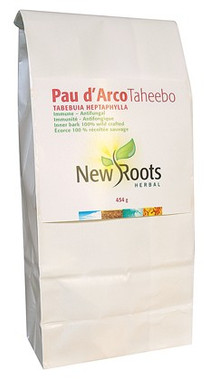 Pau d’arco has been found to have antibacterial, antiviral, antiparasitic, and antifungal properties, including anti-Candida, anticancer, and antitumour properties. Bulk powdered form.

Adults: Add 3–4 teaspoons of powder to 600 ml of water. Boil for five minutes, then let simmer for 20 minutes. Thereafter, drink as a tea. Use purified water only. Take 2–3 times a day or as directed by your health-care practitioner.

Pau d’arco is also confirmed as being an antiparisitic against various parasites, including malaria, schistosoma, and trypanosoma. Additionally, the herb has even demonstrated usefulness as an anti-inflammatory. Pau d’arco bark has many active principles, mainly lapachol, quercetin, and other flavonoids. Once the pau d’arco inner bark is dried and shredded, it can be made into a tea which has a slight bitter or sour taste and is brownish-coloured.