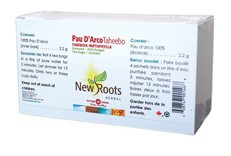 Pau d’arco has been found to have antibacterial, antiviral, antiparasitic, and antifungal properties, including anti-Candida, anticancer, and antitumour properties. Flavourful tea bags.

Adults: Boil 5 sachets for 3 minutes in 600 ml of fresh water and let simmer for 15 minutes. Strain before drinking and take 1 cup two or three times daily or until preparation is finished.

Pau d’arco is also confirmed as being an antiparisitic against various parasites, including malaria, schistosoma, and trypanosoma. Additionally, the herb has even demonstrated usefulness as an anti-inflammatory. Pau d’arco bark has many active principles, mainly lapachol, quercetin, and other flavonoids.