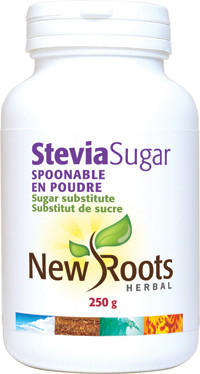 Finally, a sweetener that is not a sugar at all, so you no longer have to feel guilty about using it. Stevia is safe for diabetics. Used as a sugar replacement, stevia reduces high blood sugar levels, does not promote tooth decay, and has no calories. It is also ideal for baking and cooking.

As a dietary supplement, one (1) teaspoon of Stevia Sugar equals the taste of two (2) teaspoons of regular sugar. Add to taste.

Finally, a sweetener that is not a sugar at all, so you no longer have to feel guilty about using it. Stevia is even completely safe for diabetics. Research suggests that, unlike sugar, stevia causes no problems in diabetics or hypoglycemics. And it gets even better: it is actually used for high blood-sugar levels. Best of all, it does not promote tooth decay, but prevents it, and it has no calories.

This truly remarkable herb has been used in South America as a sweetener for hundreds of years. Its incredible properties have made it highly sought-after around the world. Stevia grows throughout Latin America as well as parts of the United States. In Japan, it is expected to be the main sweetener of the future and is now added to everything, from soy sauce to beverages.

Saccharin has been shown to cause multiple tumourous effects on animals, and it’s the government’s answer for diabetics. Pity! Diabetic candies are available with a clear note dictating “Warning: This is a carcinogenic product!” It’s shameful that the Minister of Health can be bought by rich powerful companies that produce and sell artificial sweeteners that are bad for your health.

Aspartame consists of phenylalanine, aspartic acid, and methanol. Methanol is a highly toxic poison at high levels; it is converted to formaldehyde and formic acid. These substances are highly toxic for the thymus gland. Aspartame is highly toxic for people who suffer from phenylketonuria. This inherited disease causes amino acids to accumulate in toxic amounts in the body, and the phenylalanine in aspartame can be very dangerous for them.

Not enough is known about aspartame to consider it a safe substance. However, what is known is that, according to research done by Arizona State University’s Biochemical Department, aspartame has been associated with seizures. There are also constant complaints to the FDA about recurrent headaches, dizziness, nausea, malaise, and visual disturbances.

A Sweetener for Health

Stevia is incredibly sweet, and unlike sugar, it is actually good for you. It is a whole food that has been shown to have numerous health benefits. It actually suppresses dental bacteria growth, preventing tooth decay; balances blood sugar levels; treats mental and physical fatigue; improves digestion; regulates blood pressure; aids in weight loss; and is a diuretic and a tonic. Stevia also does not produce a damp environment in the body, making it ideal for those suffering from candidiasis or mucus or water retention.