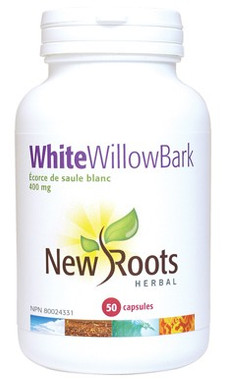 White willow bark contains salicin, which is a monoglycoside of salicilic acid. This may sound familiar, as this plant is where the common pain reliever aspirin comes from. It is used for inflammation and pain.

Take 3 capsules three times daily or as directed by your health-care practitioner.

The bark of this tree is known principally because of its properties to relieve pain and reduce fever. In the 19th century, a French chemist extracted the principal active ingredient of the willow and called it salicin. At the end of the 19th century, Felix Hoffmann, chemist for the Bayer company, produced the aspirin or acetylsalicilic acid. Nowadays, the tendency is to go back to the natural remedy to avoid the side effects of aspirin.

The willow’s bark contains glycosides; the most famous and active of them is salicin, which is a monoglycoside of salicilic acid. Salicilic acid is a soft anti-inflammatory agent, but it converts itself in acetylsalicilic acid in the body; this way, we get the most effective action of the “aspirin,” but without the gastrointestinal toxicity.

The willow’s bark has the properties of treating fever and inflammation as well as cleaning the blood, and it helps to exchange the nutritive and excretive processes gradually, restoring normal function of the body. It stimulates digestion, eliminates acumulations, and helps in heavy digestion.