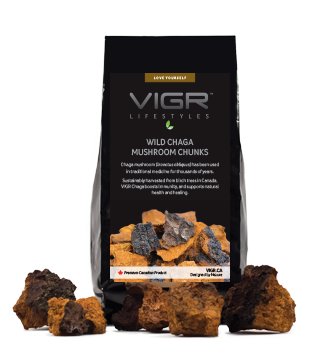 Chaga (Inonotus obliquus) is a wild mushroom that grows in the birch forests of Canada and around the world. Chaga is referred to as the “King of the Medicinal Mushrooms” because of its many anti-tumor, anti-cancer, anti-inflammatory benefits. Chaga is second only to raw chocolate in antioxidant quantity.

Chaga is a premier herbal adaptogen which is a metabolic regulator that increases an organism’s ability to adapt to environmental factors and resist stress.

Chaga contains a super powerful anti-tumor compound called betulinic acid, an anti-mutagenic compound that is naturally found in the white part of the birch bark. Chaga mushroom feeds on and concentrates betulin.

Chaga also contains very high concentrations of melanin. Melanin is the same compound as the pigment in our skin, the retina of the eye, and the pigment bearing neurons within the brain stem. Melanin fights the effects of radiation by activating the pineal gland, deactivates radioactive isotopes and converts them into benign forms. Melanin is also regarded as protection from heavy metals.

Chaga Mushroom is used to:

 Reduce the workload of the immune system

 Increase the body’s alkalinity (7.4 is the optimum PH)

 Detoxify and purify the liver

How to Brew and Consume Chaga: The Chaga Recipe

5. Pour boiling water over the strainer and chunks

6. Stir as water cools down to palatable temperature

7. The more you stir the darker the water becomes

A note on boiling:

In our experience, we have found that Chaga tastes just fine when it is exposed to boiling water. Russian users of Chaga swear by the boiled method.

The reason for 55-65 degrees Celsius or 131-149 degrees Fahrenheit is that it makes the Chaga ready to drink. We typically steep the Chaga at these temps for hours and up to several days.

 A stove top on the “simmer” setting will typically be about 140 degrees Fahrenheit.

 The lower end temps will typically go up to around 190 degrees Fahrenheit.

1. Boil or heat one liter of water in a pot on the stove or in a crock-pot

2. Add one tablespoon of chunks or 3 square centimeters of Chaga per liter

3. The tea will darken quicker if chunks are powdered using a coffee grinder, mortar and pestle, or Nutri-bullet. Exercise caution as our Chaga is extremely hard and can crack plastic coffee grinders!

4. Steep for 10 minutes and up to several hours for desired strength

1. This is done with the use of a Boswell Boiler with a 20 liter capacity